Investors pushed out Uber’s longtime chief executive, and the company hired a former US attorney general to conduct a study of its workplace culture. That resulted in a 13-page report that provided new employee guidelines, including suggesting limiting the availability of alcohol in the workplace and de-emphasising alcohol as a component of work events.

Still, while Uber’s senior executives were away in New York for the company’s $US82 billion ($120b) IPO, staffers at the San Francisco headquarters and elsewhere were drinking in the offices to celebrate the company’s stock listing, which made some of them rich.

Despite warnings from the company in its invitation to “Keep it Classy,” one executive assistant handed in her resignation after a verbal outburst and dispute with colleagues during the celebrations, according to current and former employees with direct knowledge of the incident.

A party at one California satellite office was shut down, according to one of the people, who spoke on the condition of anonymity because of the sensitivity of the situation.

“We limited the amount of alcohol during internal events last Friday and informed employees around the world that we expected them to celebrate that milestone responsibly,” Uber said in a statement. “We took action to address any who did not.”

Professors who study workplace culture said it is difficult for a company to truly change its character. By sanctioning any celebration involving alcohol during the IPO, Uber probably sent the wrong message to employees by blurring the line between acceptable and unacceptable behaviour in the workplace. 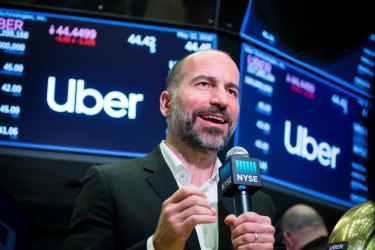 “Most organisations get into trouble at exactly a moment like this,” said Jennifer Chatman, a professor at the University of California at Berkeley’s Haas School of Business who specialises in organisational culture. “They are viewing it as an exception.”

Uber has been working to recover from a raft of incidents that raised concerns about its workplace culture. The incidents culminated in the 2017 ouster of then-CEO Travis Kalanick.

He was also caught on video in the back seat of an Uber lambasting a driver who complained about dwindling wages. Kalanick later issued an apology to Uber employees, writing, “It’s clear this video is a reflection of me – and the criticism we’ve received is a stark reminder that I must fundamentally change as a leader and grow up.”

Silicon Valley already lures employees with promises of open workspaces, complimentary coffee and juice bars, catered meals and work environments that generally mimic social settings. Cultural problems at tech companies have long been associated with excessive free alcohol at work events and parties. These types of amenities can lead to unrealistic expectations and, in Uber’s case, some said, created an atmosphere that mimicked the “bro culture” of a fraternity.

Former US attorney general Eric H. Holder Jnr was hired to conduct a report on workplace culture and diversity at Uber. The report was prompted by allegations by a former software engineer of widespread sexual harassment at the company. That engineer described a company with a broken, male-dominated culture that was hostile to women and competitive to a toxic degree.

Uber “should encourage responsible drinking, which can include limiting the amount of alcohol that is available in the office, de-emphasising alcohol as a component of work events, and otherwise taking appropriate action to discipline and address inappropriate employee conduct fuelled by alcohol consumption,” Holder’s report recommended.

After taking over, Khosrowshahi published a LinkedIn post spelling out Uber’s new cultural values , including, “We do the right thing. Period.” He added, “As we move away from an era of growth at all costs to one of responsible growth, our culture needs to evolve.”

Khosrowshahi and Kalanick could not immediately be reached for comment for this story.

Khosrowshahi and other Uber executives were in New York for the bell-ringing at Uber’s IPO launch on the stock exchange as festivities were under way last week, representing a test for the new, mature Uber. 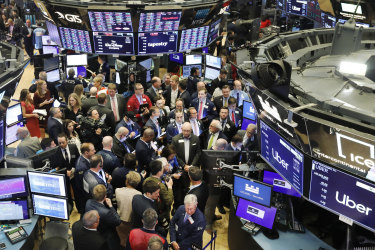 Still, Wall Street wasn’t sold. The stock hit a low point of $US36.08 ($52.58) on Monday, a 20 per cent drop from its IPO price, before rising to near its initial price point of $US45. That prompted Khosrowshahi to email employees this week to reassure them that Uber’s volatile performance out of the gate should not be a cause for concern.

“Like all periods of transition, there are ups and downs,” he wrote, according to the letter, which was reviewed by the Washington Post.

While Uber’s stock price has fallen since the company went public, it was still a cause for celebration for employees. Many own shares in the company that they could not easily cash in on before the company listed them on the stock market. Uber’s going public frees them to sell.

Late last week, Uber employees received invitations to company IPO parties that would begin at 5:30am Pacific time, an hour before the ceremonial bell-ringing at the New York Stock Exchange. The invitations noted that the eyes of the world would be on Uber.

In San Francisco, the celebrations began with mimosas and continued at a steady clip throughout the day, with employees drinking in the office, heading to bars after and then returning for a 2pm “happy hour” with company-provided beer and wine.

Employees said baseball-clubhouse-style champagne geysers erupted and bottles of liquor from Kalanick’s time at Uber were broken out. The branding on the bottles of tequila and whiskey, which employees had kept in their desks or brought from home, featured an old version of Uber’s logo that has since been phased out. At one point, Uber was forced to prevent an employee from driving home, according to an individual with knowledge of the incident, who declined to be named citing the sensitivity of the matters.

The partying continued into the night, with employees heading to downtown bars. There was some apprehension about partying in the public settings, some of the employees said. Another former employee recalled the embarrassment of watching celebrations by employees who didn’t seem to understand the significance of what was happening.

“What are we celebrating? The loss of billions of dollars in value?” the person asked. That person spoke on the condition of anonymity because that person was not authorized to speak publicly about the IPO.

Uber’s celebrations also came two days after drivers staged widespread demonstrations in cities across the country to highlight the gap between their wages and executive compensation at the company. Some employees expressed apprehension about partying so soon after the drivers’ protests over pay, especially with so little attention given inside headquarters to the demonstrations outside.

Experts in organisational culture said Uber’s IPO celebrations sent the wrong message, coming so soon after the company’s reckoning with the toxic culture of the past.

“I think that those wounds are still open, and I think that the stigma that the organization still has of being this kind of country club, frat guy, aggressive environment – it certainly doesn’t serve to counter that,” he said.

The Moneyist: My sister became my father’s power of attorney, took out a reverse...

Alan Kohler: Tell me, Mr Morrison, whatever happened to that ‘compassionate conservatism’?

Economic Report: New-home construction activity soars to highest level in over a decade, as...

Wheat feared to be next on China’s export ban list, as business heads call...