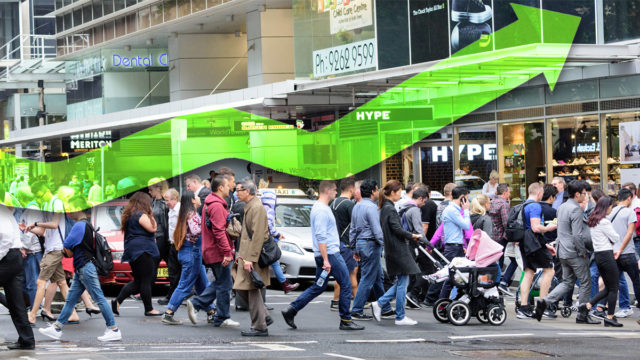 Shoppers are voting with their wallets as the economic recovery takes shape, with retail spending jumping 1.4 per cent to $29.6 billion in October, according to the Australian Bureau of Statistics.

And although the figures showed a flattening in the growth of online sales, the move to digital shopping is set to continue.

It’s not only the much-hyped startups like Kogan that are winning online, either.

Of the top 10 online sellers, six are established bricks-and-mortar players like Woolworths and JB Hi-Fi.

Australian Retailers Association CEO Paul Zahra was happy with the results and described them as “heartening”.

“We are on track to have a robust Christmas trading period, with some strong November sales,” he said.

“With Christmas trading delivering up to two thirds of a retailer’s profits, this will replenish cash reserves.” 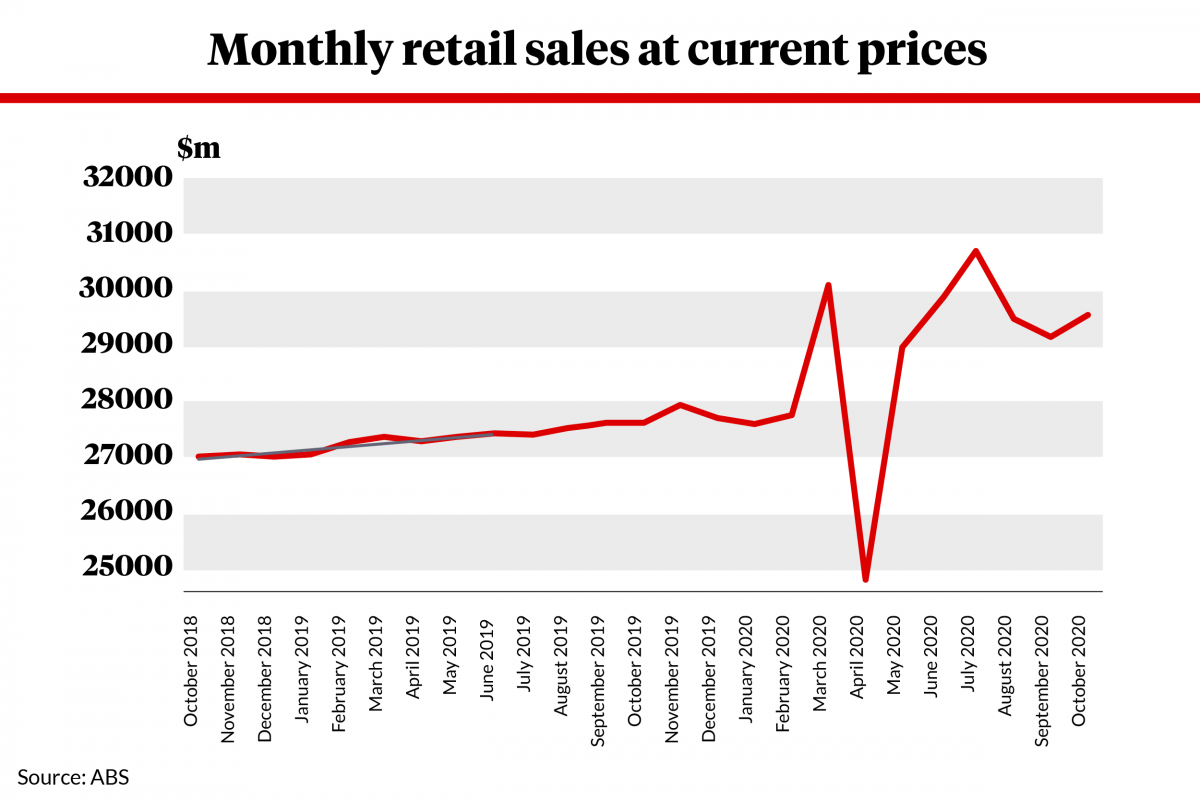 BIS Oxford Economics chief economist Dr Sarah Hunter said “the recent opening up is allowing Victoria to catch up with the rest of the country”.

“Retail sales in Victoria grew 5.1 per cent compared to 1.4 per cent nationally,” she said.

The performance was mixed across different categories, with clothing and footwear up a healthy 6.8 per cent in October, cafes and restaurants up 5.4 per cent, and department stores, a recent laggard, rising 4.5 per cent.

Meanwhile, sales of household goods fell 1 per cent after big climbs during the year driven by lockdown spending.

Although growth in online sales slowed in October, the pandemic has undoubtedly accelerated the move towards online shopping.

“Once they have set themselves up to do that it becomes easy to continue,” Professor Mortimer said.

The ABS found that online sales accounted for 10.4 per cent of all sales in October, while in the 12 months to October NAB put the figure at 12.3 per cent.

NAB’s online sales index has risen a whopping 60 per cent since hitting a low at the beginning of the pandemic. 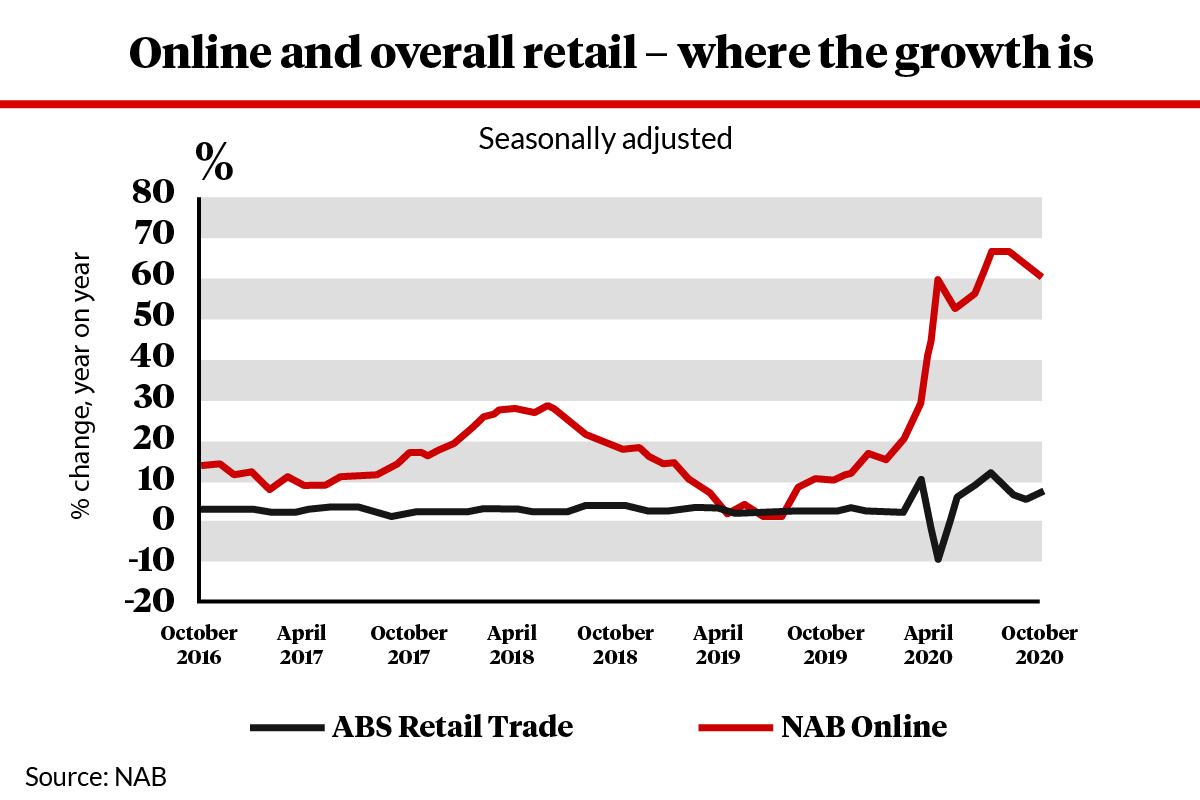 Australians are following international trends, with data from global e-commerce company Shopify showing Australia was the fourth-biggest participant in Black Friday sales after the US, Canada and the UK.

Interestingly, existing retailers are fighting back against new digital-only competitors. 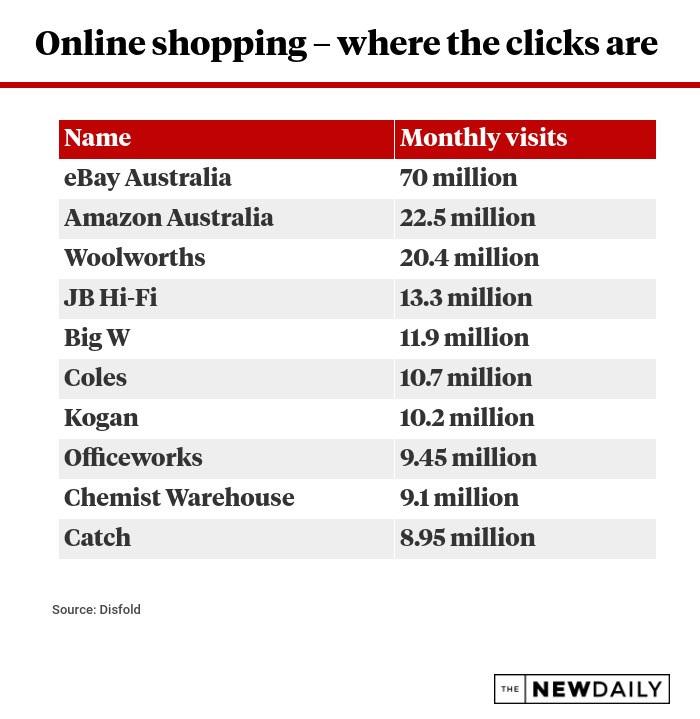 “There is a common belief that online will kill physical stores,” Professor Mortimer said.

“But major retailers have online presence and are fighting back.”

The largest online seller is industry pioneer eBay Australia, which acts as an umbrella vehicle for a huge number of brands across a wide range of categories.

Another digital category killer, Amazon, came in at number two, with Australian rival Catch coming in at number 10.

Coles, Woolworths, Big W and Chemist Warehouse are also in the top 10 along with JB Hi-Fi.

However, the big department store groups like David Jones and Myer, which once dominated shopping psyches, have slipped in recent years and did not make the online top 10.

Although moving into the online space is a necessity for traditional retailers, it is going to become more difficult as the online market grows.

“Consumers will expect the same experience online as they now get offline,” Professor Mortimer said.

“It will be challenging because alongside existing facilities they will need to provide infrastructure for paying, packing, posting, returning and refunding and that will not be cheap.”

Retailers will start to trade traditional floor space for online, he said, with David Jones already committing to cut physical sales space by 20 per cent by 2026.

“A group with 500 stores with 20 per cent of revenue online could close 70 to 80 stores and not lose sales as a result.”

Australia, with about 12 per cent of sales online, lags behind the UK and US, which each have about 16 per cent online.

“Physical shops will become places for recreation, comparing products and socialising. They will exist for reasons beyond the physical buying of goods,” said Morris Miselowski, a business futurist.

“Until now, online has mainly been about providing what we need in our daily lives – food, clothing and the like,” Mr Miselowski said.

“That is starting to move with people beginning to buy expensive items like cars and even homes online.

“Now baby boomers and the older builder generations are starting to move online, and they have larger incomes and more wealth than the Gen X,Y and Zs that have been online up to now.

“Online will have to evolve to support their needs.”

Mr Zahra added: “We need to stop seeing online as a competitor to physical retail – it’s not an either/or equation. It’s about value adding to customers.

“Any retailer without an online presence going into 2021 is really damaging their chance of success.”

The post Retail sales are rising as shoppers move online appeared first on The New Daily.

The Moneyist: ‘My husband burned through all of our finances. If we divorce, I...