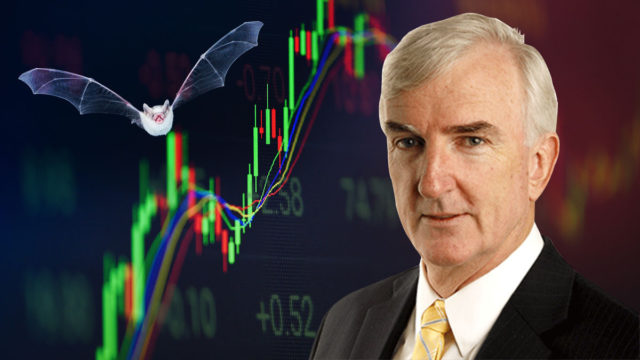 In this traditional lull between Christmas and New Year, when the nation’s pace is meant to be set by a game that takes five days to play at the MCG, consider the tale of two astronauts suddenly returned to Earth after a year stranded on the dark side of the Moon.

It is a scenario proposed a week before Christmas by a chap mentioned in these dispatches before, Anthony Peters, a splendid English investor and writer, veteran bond trader and former columnist and now a conservative private commentator via an email newsletter.

One of Mr Peters’ astronaut’s heads straight for a financial markets update: “The Dow is up 7.3 per cent, the S&P is 16.65 per cent better and the Nasdaq, bless it and its little cotton socks, has raced ahead by 44.6 per cent,” Mr Peters wrote.

“Gold is at $US1880/oz. Oil is sensibly priced for growth and stability at just below $US50 a barrel for WTI and just over $US50 for Brent. At $US362 high-grade copper is at near-stratospheric levels and well above anything seen for nearly eight years.

“Bitcoin might look a bit strange at $US23,000 but it is a bit of a geeks’ gig so anything is possible; he of course wouldn’t know that it’s leapt up by just shy of 30 per cent in the past month. But all looks well. America has come to reason and voted the Donald out of the White House.”

Mr Peters’ other astronaut isn’t so concerned with his share portfolio. His first scan of the headlines is not market numbers.

“He finds that the family Christmas he has been looking forward to for a year is just about to be cancelled. The European parliament has passed a €750 billion economic bailout package and Congress is on the verge of pumping $US900 billion into the US economy. He finds out that that’s just the follow on to $US2 trillion, which have already gone that way.

“Industrialised countries with less than 100 per cent debt/GDP have in 12 short months become a scarcity.  All anybody is talking about is a vaccine against something he’d read about on page nine of his newspaper before he left.

“Jobless figures are scary. Debt figures are worse than that. The economy is in recession. People are apparently dying and that funny little Frenchman in the Elysée Palace has been diagnosed with it after having hugged more or less every available president and prime minister – other than Boris, who has had it and would have therefore actually been a safe bet.

“The dollar is under pressure, but is that surprising given that there’s a septuagenarian Democrat headed for the White House and Congress might still end up being split? All the while practically every historic hero, inventor, navigator, traveller, pusher of boundaries and discoverer of new worlds has been defrocked for being a racist, colonialist so and so and has been subjected to damnatio memoriae.

“Our two space travellers meet up – they are very much in the same bubble – and find it not only hard but nearly impossible to work out whether they really have landed in the same place. They, of course, don’t have a clue what they missed.

“Given the strange and inexplicable incongruities they might, of course, be tempted to cash out of their pensions and head straight back into space. And who could blame them?”

Mr Peters is primarily conservative on financial, social and political fronts – the sort of reasonable conservative writer you can happily agree or disagree with but still enjoy and value his insights; the sort so sadly missing from the pages of Australian publications, left to scramble as they are among a grab-bag of second-rate, self-proclaimed champions of the Right; generally purveyors of clichés and click bait. And tedious writers at that.

A constant and growing concern of Mr Peters’ missives this year is the explosion of government debt – “fiscal opium” – that he fears cannot last.

That debt, the flip side of the central banks running their printing presses red hot, is the response by governments to the economic threat of the ‘Rona Recession.

And it is the central banks’ printing presses that in turn are responsible for the rapid asset price inflation that is the markets’ jump.

When money is free or effectively free, when holding cash means losing money in real terms, money will rush into anything that might be an appreciating asset and the rush makes said assets appreciate.

Thus we have the astronauts’ confusion – a troubled world with soaring markets.

Our stockmarket has not flown as high as the Americans – we lack the turbocharging of their tech bubble stocks – but the ASX is finishing the year in none-too-shabby condition.

(If you want scathing, try Mr Peters on the nonsense of Tesla shares.)

A better guide than those two, given Australian investors’ love of dividends, is the ASX200 Gross Total Return Index, which includes the value of our ever-popular divvies. With four trading days left, it is up 2.5 per cent this year at 74,229.

None of the indices managed to regain their record highs set on February 20 – the All Ords 7255, the ASX200 7163, the ASX200 Total Returns 77,845. That our market was charging into record territory when there was already plenty of news about a new SARS outbreak says heaps about our myopia, or momentum, or lemmings, or all three.

Australia is very fortunate to be where it is.

Our moat, our state governments enforcing health discipline, putting people’s welfare ahead of a simplistic view of short-term profits, our fiscal and monetary effort and some luck all combined to bring us this far.

The astronauts landing here would still suffer some confusion, but they also would have to be impressed.

I’d don’t think they would want to take off again. They’d want to stick around to see what happened next, but that’s another story.

Australia has broken an economic growth record. But we’re not out of the woods...

The Moneyist: My parents died of COVID-19 and left no will. My brother lives...