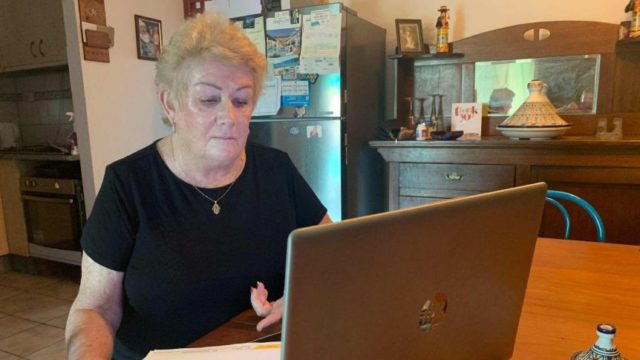 Like many northern Australians, Sue Shearer has watched the cost of her home and contents insurance soar with dismay.

“It just keeps going up and up. It’s exorbitant actually,” she said.

Yearly building insurance price hikes have pushed up her body corporate fees, in a unit complex where many of the residents are pensioners or self-funded retirees.

Ms Shearer, who is the CEO of the Council on the Ageing NT, also regularly fields calls from seniors saying rising premiums are forcing them to make distressing decisions.

“It really is causing havoc,” she said.

“It really is a big decision whether to insure your home or keep your health insurance.

“We have been lucky with cyclones for a number of years, but we will get one and then those people with no insurance will be homeless, so it’s time to look at measures now to ensure people can insure their home.”

Darwin resident Jodie Went is one of those who has had to go without insurance and, living in a cyclone-prone area, that makes her worry.

“I don’t have insurance at all because I can’t afford it, and being a low-income earner, everything I own means something to me,” she said.

Losing it all would mean starting all over again, and that would cost a fortune for me.”

Some Australians pay double, but it isn’t price gouging

The Australian Competition and Consumer Commission (ACCC) has found the rising cost of insurance is forcing 20 per cent of people in northern Australia to live without it – compared to 11 per cent in the rest of the country.

The rate of non-insurance is highest in northern WA at 40 per cent, followed by 26 per cent in the NT and 17 per cent in Queensland.

But ACCC deputy chairwoman Delia Rickard said the inquiry also found the price rises were due to industry losses rather than price gouging.

“Over the last 12 years, insurers have lost over $850 million providing house and contents insurance in northern Australia,” she said.

The reality is there are more extreme weather events and more claims, and that makes it a very costly place to insure.”

The ACCC is now calling for much more pricing and product transparency to allow customers to compare like with like.

Moves to demystify the insurance industry

It has recommended the federal government legislate industry changes including mandating standard cover, providing simple key fact sheets, and standardising the descriptions of what is and is not covered.

“We want to make it easier for people to shop around,” Ms Rickard said.

“For example, in Townsville when comparing prices offered by two different insurers, we found a $2000 difference in the quotes.”

The ACCC also recommended the federal government establish a price comparison website that includes every insurer.

Ms Rickard expected the recommendation to prompt “a lot of resistance” from the industry.

“But that, if it’s done well, will make a real difference in terms of finding the best deal in your area,” she said.

The inquiry found that in 2019, northern Australians paid $5.5 million in insurance stamp duty to WA, $9 million to the NT and $65 million to Queensland.

“Stamp duty adds 9 to 10 per cent to the cost of a policy in northern Australia,” Ms Rickard said.

The ACCC also wants some stamp duty tax to be spent on subsidies for people struggling to afford insurance.

“That’s a holiday, or petrol in your car.

“People try and budget, but every year all these unforeseen costs just go up and up.”

Mutual Funds Weekly: These money and investing tips can help you with stock and...

The Moneyist: Our best friends share our pandemic pod, but their spending is out...