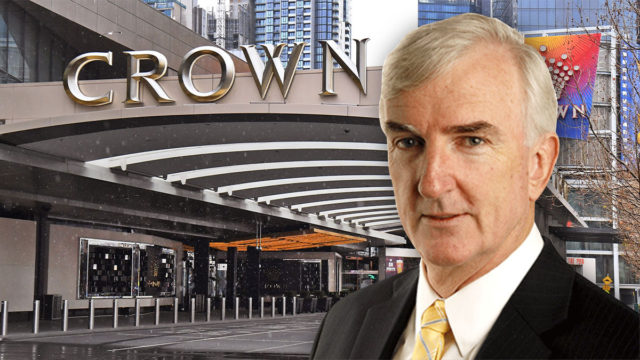 For all the commentary about what might or might not happen to the Packer-controlled Crown Resorts, it pays to look at what the serious money is saying: A little embarrassing, but she’ll be right, mate.

Several billion dollars is betting that the inquiry will blow over after a few token heads stop rolling and Crown will be back soon enough to doing what it does best – getting whatever it wants from three state governments.

To venture a little further into what the real money is thinking: The New South Wales inquiry gets the headlines, but COVID and Chinese tourism matters more to the bottom line.

That’s what is written in the accompanying graph of the Crown Resorts share price. 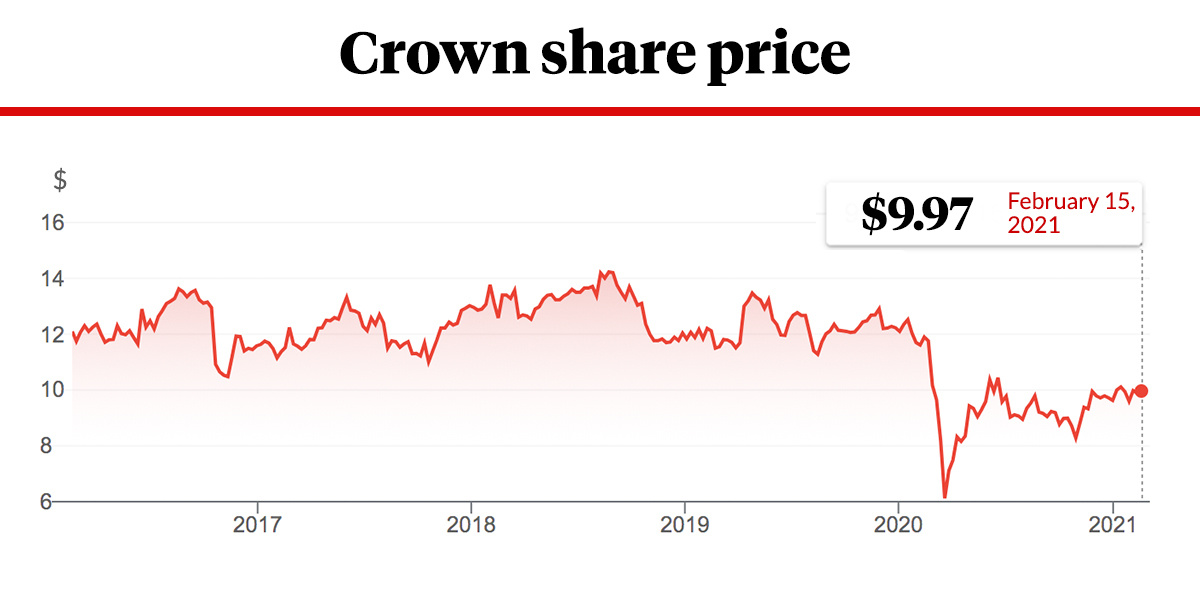 Draw a line through the share price over the four years before the pandemic hit – and certainly through the 15 months up to that event – and Crown shares to the nearest whole number were worth about $12 each.

That 15-month period is made up of nine months before NSW announced there would be an inquiry into Crown’s suitability to hold a casino licence and the better part of six months after – the shares remained around $12.

Now they’re worth about $10, as they have been for three months.

Allowing for the impact of pandemic-caused closures, especially for the Melbourne operation, and the loss of gambling tourism from Asia in general and Australia’s problems with China in particular, it looks like the stockmarket isn’t much worried about Commissioner Patricia Bergin’s report at all.

And why would it be? The report itself says Crown can have its NSW licence when the named individuals are gone – they are – and James Packer’s shareholding is sterilised – they’re working on it.

Chair Helen Coonan will have to come up with some new directors who actually know something about money laundering, preferably how to guard against it rather than do it.

That will be a nice change from what was the case – conflicted Packer confidantes and worthy types prepared to lend their reputations to the casino business despite its inevitable underbelly.

One of the new directors also will need to be acceptable as chairman.

Once a credible board is in place and Mr Packer’s shareholding rendered without influence, former senator Coonan will need to go.

A decade on the board without noticing what was going on is not sustainable.

And then Crown can get back to dealing with its bigger problem – getting punters through the door who want to hand over money.

Oh, the Victorian and WA governments will have to harrumph a bit, for form’s sake, but they’ve never been much interested in how sausages are made and are unlikely to be so now.

The WA government was made aware of millions of dollars of money laundering at Crown Perth but took little interest.

And as for the Victorian government, whether Labor or Liberal, for 27 years it has been a matter of “Is there anything else we could possibly do for you, Mr Packer, and would you like cream with that?”

Once the Sydney casino has its licence, you can rely on Crown resuming its lobbying of the NSW government to be allowed to have poker machines.

It was a fig leaf over the O’Farrell government’s farcical bowing to the Packer machine that the Barangaroo operation was supposed to be a “VIP-gaming facility” without gaming machines.

Without international VIPs, the casino will be crying poor and rattling the tin of lost government revenue as an excuse to have the pokies installed. You’d be a mug to bet against it.

So the present market capitalisation of Crown Resorts of some $6.75 billion signals the NSW kerfuffle will soon pass and will probably pass sooner than the question marks over the suitability of Crown directors sitting on other boards.

Most obviously, there’s the role of John Alexander on the Seven West board.

The former chairman and CEO of Crown Resorts and long-time Packer factotum was fortunate to take a golden parachute from the tower while still claiming there was nothing to see.

Commissioner Bergin was not flattering: “Mr Alexander was in the most powerful positions in Crown during the period 1 February, 2017 to January 2020 as chairman of the board and CEO.

“Although he inherited the disastrous aftermath of the China arrests and had to work through the process after Mr Packer resigned from the board in March 2018 due to ill health, Mr Alexander’s stewardship led Crown to disastrous consequences.

“This included processes that exposed its directors to conflicts of interest and remote management by Mr Packer and a failure to protect Crown’s casino licensees from the infiltration of criminal elements through, at the very least, its lack of robust junket approval processes and a lack of proper oversight and monitoring of risks to money laundering in its subsidiaries’ bank accounts.

“Mr Alexander’s perception of his relationship with Mr Packer was either blind to the reality or lacking in candour.

“As one current director of Crown observed in January 2020, although it would be hard to think of “anyone more loyal” to Mr Packer than Mr Alexander, “running a high-profile public company” was not his “strong suit”.

The report went into detail about Mr Alexander feeding James Packer board information, including an insight into the relationship Crown enjoyed with the Victorian gaming watchpuppy.

“Mr Alexander communicated with Mr Packer throughout the whole of the period that he was on the Crown board and in particular after Mr Packer resigned in March 2018,” the report read.

“There is no basis upon which it could be assumed that Mr Alexander gave any thought to the requirements of clause 2.3 of the Controlling Shareholder Protocol when communicating confidential information to Mr Packer.

“That included the provision of information that disclosed the result of what had occurred during in-camera discussions at a Crown board meeting. It would appear that Mr Alexander gave no thought to the propriety of such a process or whether it was in the interests of Crown that the result of confidential discussions with independent directors should be communicated to Mr Packer.”

Disclosure: It was John Alexander who flicked me from Channel Nine in 2003, against the wishes of Nine’s editorial management.

The post Michael Pascoe: What the betting says about Packer’s Crown – No worries, mate appeared first on The New Daily.

NerdWallet: Why you should ask your parents about their financial plans, even if it...

How to Invest In Stocks Safely