French and British wine drinkers are helping to soften the blow of Chinese import tariffs on local winemakers, but the $1.2 billion industry is still doing it tough.

Data released by the Australian Bureau of Statistics on Tuesday shows Australian wine exports to the UK were up 206.7 per cent year on year in January, totalling $1.04 billion over the month.

Exports to France rose by a whopping 519 per cent to $471 million – the second-highest level on record in original terms – while exports to the US increased 25 per cent to $1.2 billion.

The figures show local winemakers have found new customers for their products after China introduced punitive tariffs of 107 to 200 per cent in November. But unfortunately the industry is still well in the red.

Overall Australian wine exports in January were down 53 per cent, or $81 million, year on year, and that’s because trade with China fell off a cliff.

But months after our biggest trading partner hit the industry with eye-watering penalties, that figure fell to just 1 per cent this January. 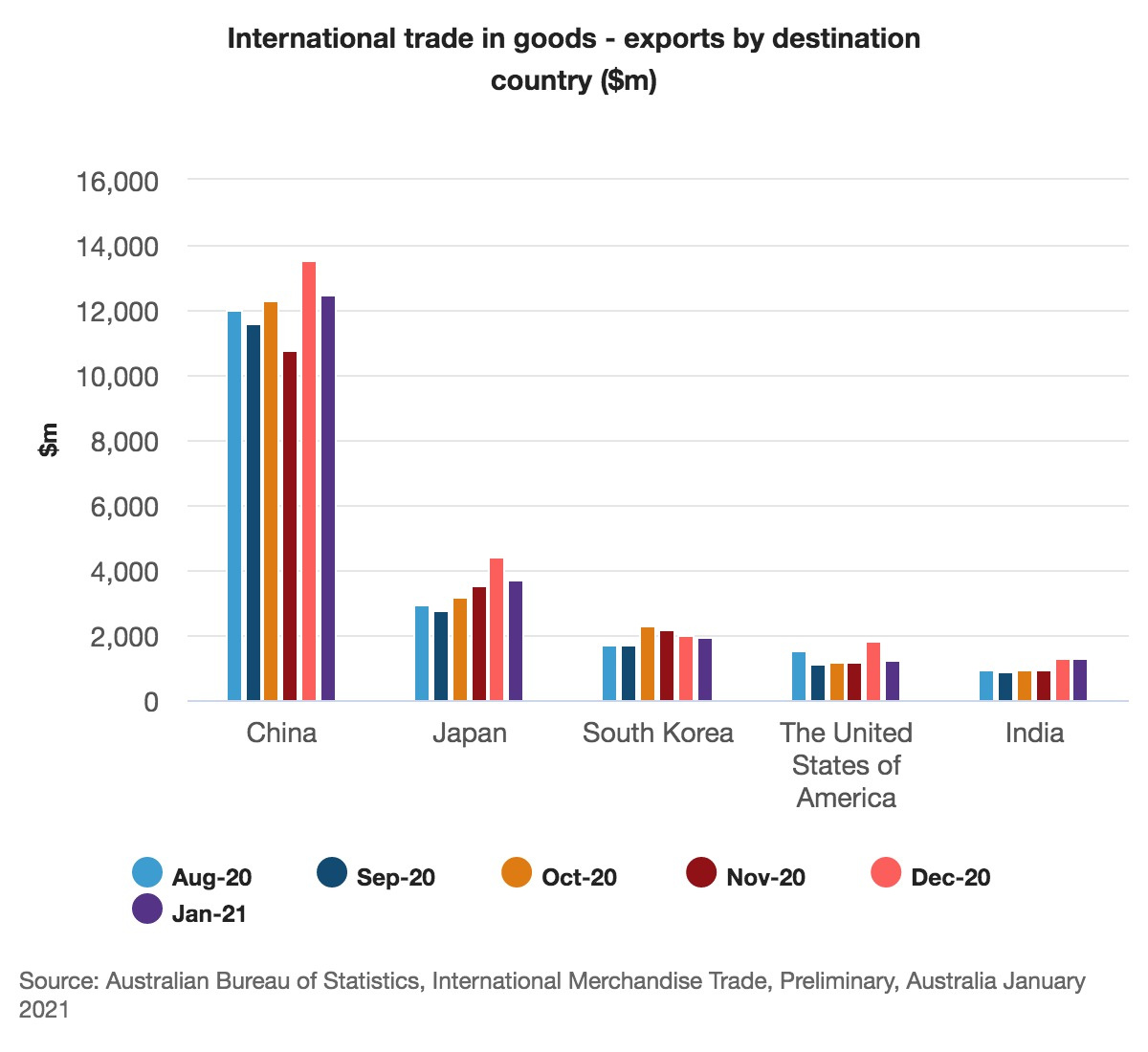 In annual terms, Australian wine exports to China were down 56 per cent in November and 98 per cent in December.

Mr Reeves said such large falls were expected, given Chinese importers were forced to pay more than double the usual price for Australian wine because of the tariffs placed on them.

He said it would take years for many Australian winemakers to adjust their businesses accordingly.

“Their sales channels have been so geared towards China and building those relationships up … that changing now and having to try new markets, it’s not an overnight fix for them,” Mr Reeves said.

In a sign of the major impact of the tariffs on local winemakers, Penfolds owner Treasury Wine Estates revealed last week that profits from its China business fell 37 per cent to $78.8 million over the six months to December 31.

Independent economist Saul Eslake said Australian winemakers were  having to settle for lower prices elsewhere, too.

“The irony is the Chinese were accusing Australia of dumping wine in their market … [but] if anything Australian wine exporters were exploiting Chinese consumers by charging them higher prices,” he said. 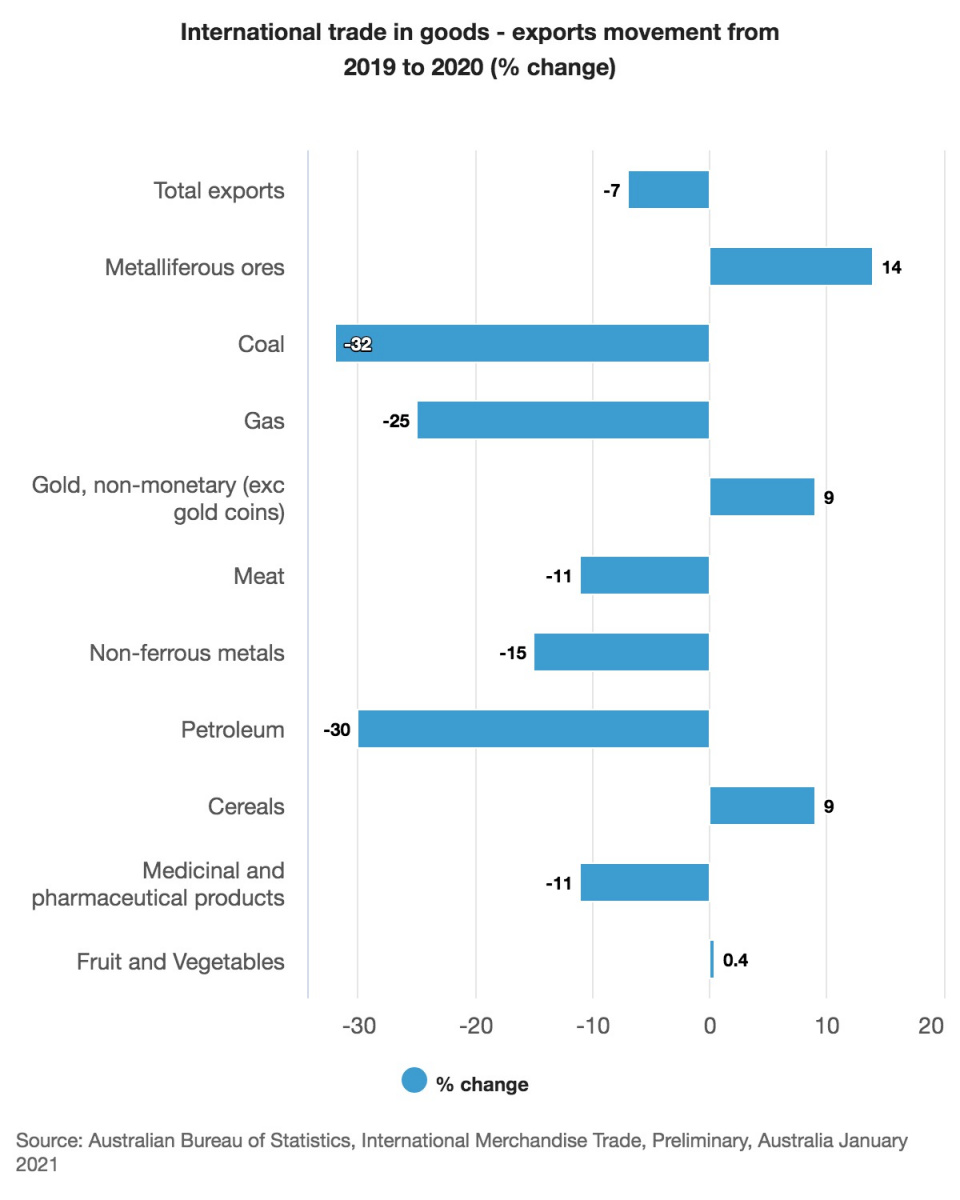 Meanwhile, the impact has stretched into other markets restricted by China too, including seafood, timber, and meat.

Seafood exports fell 143 per cent year on year in January, while meat exports declined 32.9 per cent, and wood fell 14 per cent.

Across those markets, combined exports fell $491 million year on year.

But although restrictions on these industries are disruptive, their impact on the overall Australian economy is relatively minor – largely thanks to our $14 billion monthly trade in metal ores.

China has not restricted iron ore exports, and it shows.

The overall ore trade soared 53 per cent in January against 2020 figures, with China representing more than 80 per cent of total iron ore exports.

It drove a 13.2 per cent annual increase in total exports to China, reaching $12.4 billion and far outstripping our $6.7 billion import bill.

Whatever aggregate impact the Chinese sanctions are having is being offset by the fact that they just have to buy our iron.’’

Overall exports are actually surging, Mr Eslake said, citing his own seasonal adjustments to the figures, which suggest Australia actually recorded a $11.5 billion trade surplus in January, which could potentially be a record.

The original figures (which don’t correct for seasonal factors) showed a trade surplus of $8.7 billion in January, a 2.1 per cent monthly decline.

The Moneyist: I married the ‘life of the party’ who was a regular at...

Alan Kohler: Australia is placing its recovery hopes on the trays of utes — and...

The pandemic has fuelled extreme inequality. It’s time for a global reset