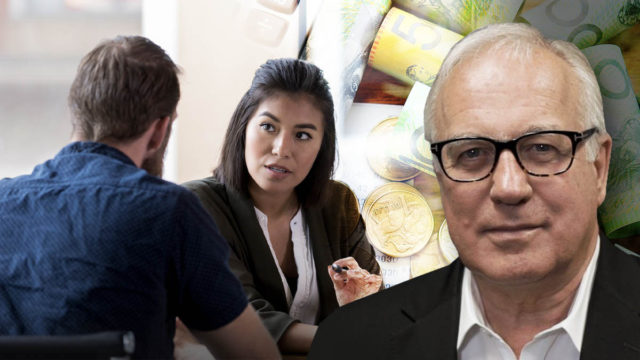 Two great frauds are being perpetrated on Australians who need financial advice.

The first is that advice has always been about selling financial products to them, not just giving advice, and the second fraud is the idea that a big, expensive Statement of Advice (SoA) covering every aspect of their financial life is needed every time someone engages an adviser.

It’s not. Never has been. To justify expensive, ongoing fees, the industry has deliberately maintained the fiction that a 70-or-so-page SoA, costing at least $3000, is required by law.

Financial advice in Australia is not only overpriced, it has always been used to flog products, and still is.

What’s more, the government is in on it.

All definitions of advice in the Corporations Act refer to “financial product advice”, not just advice.

Also, to explain how financial advice works, the Moneysmart.gov.au website has a case study in which someone named ‘Rhett’ pays $3500 for a plan, which is roughly the average cost of an SoA, as part of $13,600 in fees in his first year with an adviser.

It makes the cost of advice prohibitive for all but the wealthiest clients, unless they’re either being ripped off or, more likely, sold a product.

The expensive SoA has always been at the heart of the high cost of financial advice in Australia, but in fact the statement that is required and defined by the Corporations Act is actually supposed to be “brief”.

And as I understand it, the Financial Planning Association is now working with ASIC to make it brief, not printed on paper, and even in the form of a short video if that is what the client wants. ASIC agrees that this would be fine.

But the laws were passed 20 years ago so no one has been in a hurry.

On Monday this week the Financial Services Council, which represents banks and wealth managers, issued a green paper recommending that statements of advice be replaced by shorter, more flexible “letters of advice”.

Good idea, except the FSC is a bit late to the party and the real purpose of the green paper seems to be preserving the role of advisers as distributors of financial products for the FSC’s members.

Last year, the council commissioned actuaries Rice Warner to do a report on the future of advice, which was handed to them in August. This week’s paper is the result of that report.

In it, Rice Warner recommended that product recommendations and advice be separated into two separate streams, “strategic advice” and “financial product advice”.

The former, in Rice Warner’s scenario, would not involve any recommendations, and would be divided into three streams: General information; simple advice, such as how much life insurance was needed and whether to pay off the mortgage first; and complex advice, like a comprehensive pre-retirement plan. No products, just advice.

This week’s FSC green paper referred to the Rice Warner report approvingly, and then rejected it, without saying so.

It came up with similar classifications of advice into simple and complex, except that both of those could include product recommendations.

Most of the coverage of the FSC paper this week congratulated them on trying to reduce red tape and regulation, but it all missed the point.

Product distribution masquerading as advice – like the well-informed TV sales people at JB Hi-Fi for example – has always been the dirty secret of the financial planning industry, along with the expensive and unnecessary statements of advice that no one reads because they’re too long, but for which everyone pays for the rest of their lives.

The FSC paper is nothing more than a sneaky attempt to keep that system while appearing not to.

Later in the green paper, there is this weird recommendation: “Financial product advice as defined in Section 766B of the Corporations Act be removed.” Removed? What does that even mean in the context of retaining product recommendations as the paper says earlier?

And then next to that there’s a box that says: “Discussion. Should product be separate from advice? How best would this separation be incorporated into the scaled/limited comprehensive model of advice currently?”

When investment product commissions were banned in 2012, planners moved to charging an ongoing percentage of funds under advice (FUA), which meant they had to invest money in financial products in order to get paid … forever.

Meanwhile, the expensive statement of advice has been used to justify high percentage fees, usually about 1 per cent of FUA.

It’s meant that historically, this industry’s DNA has been about concealing the true cost of advice inside the financial products recommended, and then getting paid a percentage of total funds year after year no matter what.

It would be like doctors getting paid a percentage of the medicines they prescribe and continuing to get paid long after the initial consultation.

The industry is now finally moving towards charging by the hour, or by the project, or agreed retainers, but it’s slow and painful, and guess what?

They are now finally complaining about the cost of compliance, and specifically the statement of advice, because it’s harder to pass on those costs now.

Agreed – compliance costs are too high, but let’s get the products out of advice as well.

Alan Kohler writes for The New Daily twice a week. He is editor in chief of Eureka Report and finance presenter on ABC News

Mutual Funds Weekly: These money and investing tips are timed for a bull market...

The Moneyist: My stepmother got nothing when my father died per their prenup. She...