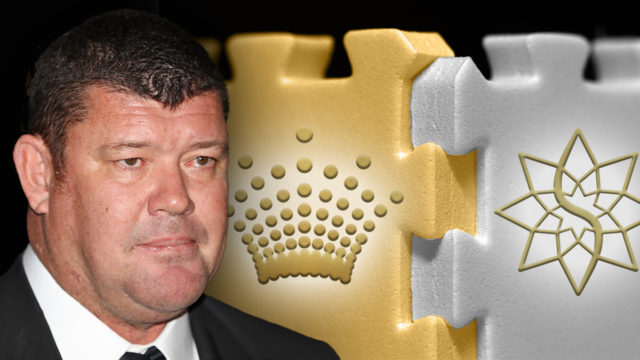 James Packer’s days at Crown are drawing to a close.

Three different takeover bids have offered him a way out of an investment that has turned sour and dragged his name through the mud – including a $12 billion merger offer from The Star.

Mr Packer’s star lost its lustre in February when a NSW inquiry found Crown unfit to run a casino at its shiny new Barangaroo complex on Sydney Harbour.

That followed a series of revelations about dealings with Chinese triads, money laundering, the jailing of staff for breaking Chinese law, and admissions he acted in a “shameful” and “disgraceful” manner.

You could be forgiven for thinking that being found unfit to run a casino in NSW would mean Crown would have to abandon its casino.

But in NSW, where backroom deals reign supreme, a seven-year-old arrangement with the state government means that won’t happen.

The deal means Crown was allowed to keep its licence by promising to make improvements.

An exasperated chair of the state’s Independent Liquor and Gaming Authority, Philip Crawford, told ABC’s 7.30: “If not for these contractual arrangements, the finding would have been they’re not suitable to hold a licence and they wouldn’t have the licence.”

“We would have endorsed that. Absolutely,” Mr Crawford said.

All the regulator could do was ensure Crown upped its game before giving Barangaroo the go ahead.

Crown chair Helen Coonan believes it will open this year.

Mr Packer was nonetheless banned from communicating with the Crown board and told to cut his 37 per cent shareholding to 10 per cent – which got the sharks circling.

US financial giant Blackstone has increased its $11.85-a-share bid by $0.50 to value Crown at $8.36 billion, while its compatriot Oaktree Capital promised to stump up enough cash to buy out Mr Packer.

But it looks like Crown’s local competitor, The Star Entertainment Group, has come through with a winning hand.

It has offered a share swap merger with Crown, including cash payments for 25 per cent of the shares.

The Star, which owns casinos in Sydney, Brisbane and the Gold Coast, says it won’t offer a premium, but wants to run the show.

“They’ll have to offer some premium.”

There might be some wrangling about price, but Star has a few aces up its sleeve. Crown has had its reputation trashed and faces two royal commissions, in Victoria and Western Australia.

“They are basically saying that Crown is buggered and we are doing them a favour by lending them our regulatory clearance,” Mr Mayne said.

Stuart Jackson, analyst with Montgomery Asset Management, said “Star doesn’t have the same sort of issues as Crown so they could probably get the Sydney casino operating a bit faster”.

Anti-gambling campaigner Tim Costello believes handballing Barangaroo to Star would be a sleight of hand that would allow the group to avoid the kind of scrutiny that has hit Mr Packer so hard.

“They’ve got a licence so they can jump that hurdle, but we’ve never really had any inquiry into Star and casinos basically exist to launder money,” Reverend Costello said.

“Star got under the radar with all that attention on Crown, and it thinks it has a licence so it can dodge all that probity stuff.”

Reverend Costello said the community would not be better protected if the deal was made without a thorough investigation of Star.

“I’d be very surprised if there weren’t some similar dubious practices, because their high roller businesses are very similar,” he said.

But Star could have another option with Crown.

“Crown made an agreement at the start of the whole process that they would operate entirely on a business model of high and middle rollers from China in particular who would only play table games,” said Charles Livingstone, associate Professor of Public Health at Monash University.

“That was never really going to fly because there aren’t enough high rollers in the world to run a large casino just on table games.

“So eventually they would have gone for [a licence for] pokies.

“If Star’s licence eventually allows it to put pokies in there, well bingo, they’ve got two casinos within walking distance from each other running amok with poker machines and tables.”

Star’s incumbency also gives it an advantage over Blackstone. The American group has no track record in Australia and so would have to go through a probity inquiry to be able to operate casinos.

But Mr Packer will have a major say in who ends up buying Crown.

However, Mr Packer has committed himself to following the Crown board’s advice and that will work in Star’s favour.

Star has promised to keep the Crown board in place so “the board won’t want to sack themselves by choosing Blackstone. They will go with Star,” Mr Mayne said.

“Star is only giving Packer the option to get out of a quarter of his shares and he will have to sell more to satisfy the 10 per cent [regulatory demand].

“He’ll still have 19 per cent if [Crown chooses Star], so he’ll have to sell another 9 per cent.”

The post James Packer nearing exit at Crown as board mulls takeover bids appeared first on The New Daily.

The Moneyist: I gave my ex-husband half of the first two stimulus payments for...