Under existing laws, a corporation can commit the crime of negligent manslaughter. But the review found many lawyers have identified big hurdles to getting a conviction. Prosecutors need to identify a grossly negligent individual who embodies the company and whose conduct can be attributed to the corporation.

Lisa Chesters, Labor’s assistant spokeswoman for workplace relations, on Friday announced that a Shorten government would work with state and territory governments to establish a uniform industrial manslaughter offence across the country.

Labor would also establish a national advisory committee made up of representatives from each state and territory who have been personally impacted by a serious workplace injury or death. They would be asked to provide advice to the federal, state and territory work health and safety ministers and would receive support from SafeWork Australia to develop recommendations to governments.

“We know that more work needs to be done to make sure Australian workplaces continue to be the safest they can be. This includes making sure that deterrents and penalties work effectively to reduce injuries and prevent deaths,” Ms Chesters said.

Dave and Janine Brownlee, whose son Jack, 21, died after a 3.2 metre trench collapsed on him while he was working in Ballarat are strong supporters of industrial manslaughter laws. Their son was one of 157 workers killed in Australian workplaces last year.

“Having harmonised laws right across the country will make it easier for WorkSafe to prosecute cases with everyone working off the same play sheet with the laws all the same,” Mr Brownlee said.

“I think these laws are to make workplaces safe and everyone to come home from work.” 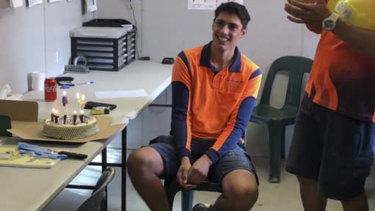 Christopher Cassaniti, 18, died at the scene of a workplace scaffolding collapse.Credit:Facebook

Apprentice formworker Christopher Cassaniti, 18, was the fifth person to die this year after he was crushed in the rubble of a catastrophic scaffolding tower collapse at Macquarie Park. Another worker, aged 39, was seriously injured.

His uncle Joe has made a plea for “stringent measures regarding safety on construction sites”. After the accident, he told reporters that the family did not want his death “to be just another statistic”.

“When serious accidents do happen in workplaces, families also need to have confidence the system will give them fair access to justice. Workplace health and safety is a shared responsibility.”

The Minister for Jobs and Industrial Relations Kelly O’Dwyer has said the government is committed to ensuring all jurisdictions have “robust systems in place to address workplace fatalities and to improve support provided to families affected by the loss of a loved one”.

Ms O’Dwyer has said a Senate Committee recommendation for a new industrial manslaughter offence based on the Queensland model “will not address the underlying issues identified by families impacted by workplace fatalities”.

“The current offences in the model [Work Health and Safety] laws, together with current criminal manslaughter laws, are able to address workplace deaths provided they are applied appropriately,” she said. “Where there has been a workplace death, all of those responsible can be prosecuted under the existing offences regime and the general criminal manslaughter provisions.”

“A fine, which can be covered by insurance, as punishment for causing, the death of another person is deeply insulting to all working people and the families of the untold thousands who have died at work,” he said.

Anna Patty is Workplace Editor for The Sydney Morning Herald. She is a former Education Editor, State Political Reporter and Health Reporter.

The Margin: Joe Biden’s rescue dog is getting an ‘indoguration’ this weekend

Economic Report: New-home construction activity soars to highest level in over a decade, as...