When Nick Sengstaken arrived at the University of North Carolina a few years ago to start his college career, he wasn’t thinking too much about finances. But money was soon on his mind. “When I came on campus I was a naive first-year who went to the student store, bought a bunch of textbooks and then had a massive bill,” said Sengstaken, who is now finishing up his junior year.

And throughout his college career, he’s been dogged by the high cost of textbooks. Sengstaken was the campaign coordinator at UNC for the college affordability campaign run by U.S. PIRG, a consumer advocacy organization, and has always kept a close eye on student costs.

With the merger of McGraw-Hill and Cengage, two major textbook publishers, experts worry that these college materials will only get pricier.

For instance, he needed a textbook, CDs and other products for music major course he was taking. That cost him roughly $500. Sengstaken also remembers paying for codes to access digital course materials in other classes that cost him nearly $300.

Now experts worry the challenges students face in order to pay for course materials are about to get worse. McGraw-Hill and Cengage CNGO, +109.68% two major textbook publishers, announced Wednesday that they would merge, creating the second-largest supplier of textbooks and higher-education materials. Right now, five companies control about 80% of the textbook market and, if the merger is approved by regulators, that number could go down to four.

“The textbook market is already highly concentrated and this just takes it and puts it into fewer hands,” said Nicole Allen, the director of Open Education at the Scholarly Publishing and Academic Resources Coalition (SPARC), which advocates for more open sharing of educational materials. “Students are already captive consumers in this and this would just make it worse.”

Textbook costs have skyrocketed over the past several years — the average price increased 88% between 2006 and 2016, according to the Bureau of Labor Statistics — and some have worried that the relatively high concentration of the market, is partly to blame for those price increases. (Another major factor is that the consumers of the textbooks, students, don’t get any choice in what they need to buy). 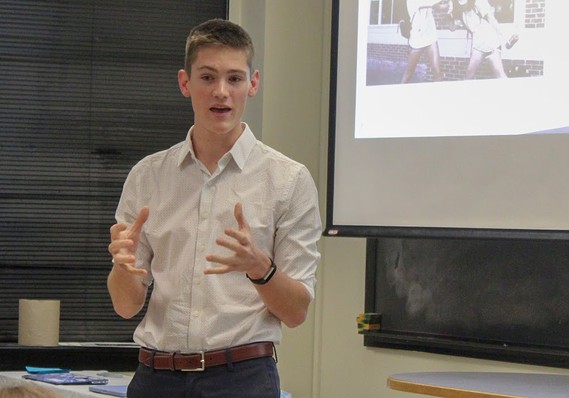 Nick Sengstaken said he was naive about textbook costs during this first year at the University of North Carolina.

Those costs have taken a toll on students. Students spend roughly $3 billion of their $120 financial aid a year on textbooks, according to a 2016 PIRG report and about 65% of students said they skipped buying a textbook because it was too expensive, PIRG found in 2014.

Economics 101 might suggest that fewer players in a market means textbook costs will rise. However, Joe Esposito, a management consultant specializing in publishing and education technology, said it’s possible — at least in the short-term — that the merger will help lower the cost of course materials.

That’s because Cengage currently offers a service, called Cengage Unlimited, where students buy a subscription and get access to the company’s entire catalog for the period of the subscription, instead of paying for individual titles for each course. (It costs $120 for four months, $180 for one year or $240 for two years.) The company estimates the program has saved students more than $60 million during the 2018-2019 academic year.

‘The textbook market is already highly concentrated and this just takes it and puts it into fewer hands. Students are already captive consumers in this and this would just make it worse.’

Currently, students likely still have to purchase textbooks from another company on top of their Cengage Unlimited subscription, because the catalog is still relatively limited Esposito said. The merger will give the new combined company 44,000 titles, which could make the subscription more valuable to students and put pressure on other publishers to lower their prices to compete.

Nana Banerjee, the chief executive officer of McGraw-Hill, echoed those sentiments, saying that the merger will bring economies of scale, and offer students access to a wider selection of titles and a better overall technological experience at a lower price.

In addition, Banerjee said the combined company will probably have a market share in the low- to mid-teens, which won’t be enough to “start dictating a market trend.” The merger is subject to approval by regulators.

Consumer advocates are skeptical the deal will benefit students

Still, stakeholders are skeptical that the merger will benefit students. Esposito said he expects that as one or two players in the industry gobble up more market share, “you’re going to see incremental price increases.”

The textbook industry has struggled over the past several years, in part because students face challenges affording the materials. “Textbook publishers priced themselves out of their own market and now are scrambling to transition,” Allen, of SPARC, said.

The way the sector has responded to those trends, makes Kaitlyn Vitez, director of PIRG’s make Higher Education Affordable Campaign, wary of any claims that the new combined company will decrease costs for students.

In some cases, professors and publishers have required students to buy a code that they use to access homework or other course requirements. Unlike a textbook, these typically can’t be bought used, rented or re-sold.

‘The move by these publishers in order to continue operating in the space is to cut prices a little bit and to force students to buy materials.’

In addition, over the past several years, companies, including McGraw-Hill, have struck deals with colleges called “inclusive access programs,” which allow students access to digital materials that are significantly cheaper than the price of traditional textbooks, but where students are often directly billed for the materials through the schools.

The companies and the schools are required by law to give students time to opt-out of purchasing the materials. But critics worry that in some cases the window for opting out may be too narrow for students to make an informed decision. They also worry that in some cases the pricing of these arrangements isn’t clear enough for students to evaluate whether they might save by renting or buying used materials instead.

In fact, it makes sense for publishers to discount costs through these programs. They know that students are much more likely to opt into the programs than they would be to buy a new textbook the traditional way, Esposito said.

“Instead of going to a secondary market or buying the secondary materials at all, let’s bring down the cost to what you’re willing to pay,” Banerjee, the McGraw-Hill CEO, said. The company estimates that its inclusive access program saved students $55 million in 2018.

Tonja Conerly, a sociology professor at San Jacinto College, a community college system in the Houston area, said she appreciates these programs from publishers because they give her students access to course materials on day one of her class at a lower cost than physical textbook. But they’re second to what she prefers requiring on her syllabus — free materials.

‘Not having the cost of the textbook is just astronomical for them, it’s just a huge benefit for them.’

Conerly has been using OpenStax, a Rice University-based database of open licensed textbooks, which allows students to access them for free in digital formats. As textbook costs have increased over the past several years, educators and some members of Congress have responded by pushing to expand the use of these types of materials known as Open Educational Resources.

By using OpenStax, the price of a textbook is one less thing her students have to worry about, Conerly said. It can be a particularly big burden for the demographic of student she works with, who are often first-generation students working to afford school and to live.

“Not having the cost of the textbook is just astronomical for them, it’s just a huge benefit for them,” Conerly said.

Conerly can use free resources for her introductory courses, but the OpenStax database isn’t yet large enough to include what she needs for her upper-level classes, she said. It’s those cases where OpexStax isn’t available that she’s using the inclusive access programs offered by publishers. “I’m just trying to get them the best deal that I can,” she said.

“I’ve been teaching for over 15 years now and I’ve always been bothered with the cost of a textbook,” Conerly said, adding that students shouldn’t have to choose between eating and buying a book. “We’ve been talking about textbooks being expensive for so long. [The industry] doesn’t have a choice but to listen now because people have options.”

Australian economy could be $106 billion larger than budget forecasts by 2024: Deloitte