“We intend to get a good feel for the asset and work with the locals to return their pub to its former glory,” Mr Arnaout said on Saturday.

He will have his work cut out. When the pub, affectionately known as “The Drain”, was first listed for sale in February, some locals said they didn’t want “some latte-sipping person coming here and mucking the pub up”. 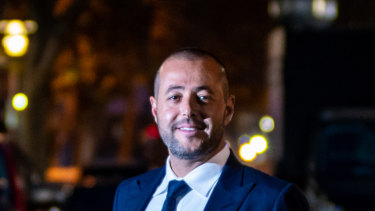 Iris Capital’s Sam Arnaout wants to work with the locals to return their pub to its former glory.Credit: Simon McCarthy

“Multiple local, interstate and international investors vigorously challenged for the right to acquire this most unique of hospitality assets, and the winning bidder identified with the once-in-a-lifetime opportunity to create asset-class price history,” Mr Jolliffe said.

Close to $200 million of pubs have changed hands so far this year, the latest being Mr Singleton’s purchase of the Elanora hotel in Gosford for about $25 million.

Mr Arnaout said the Steyne positioned Iris Capital as a “genuine hospitality leader in this part of the world, and complements our macro coastal investment strategy in respect of similar landmark projects such as Newcastle’s $700 million East End development”.

Iris Capital beat out a number of possible contenders such as pub tsar Justin Hemmes, who already owns the Newport Hotel on Sydney’s northern beaches and recently bought the Three Weeds pub in Rozelle.

Mr Laundy will use his share of the cash to boost his portfolio, which includes his latest The Marsden Hotel and Brewhouse in Sydney’s north-west.

“When considering the sale of The Hotel Steyne in the context of our recent key transactions concluded in multiple states nationally this year, it remains our considered view that market strength and depth are not only positive, but also currently serve to embolden an already robust asset class,” Mr Dragicevich said.

The Moneyist: We were friendly with our neighbors for decades, until recently. One day,...

The stockmarket continued to rise after the US Capitol riots. Should investors be worried?