There are some factors specific to Joyce and Qantas that undermine that notion that a decade plus, perhaps a decade and a half, is too long for a CEO to remain in the role. There’s also some data on CEO performance – and an exemplar – that underscores the view that Joyce isn’t overstaying his welcome.

Joyce was appointed CEO in late 2008, as the global financial crisis was erupting. Airlines were hit particularly hard. Qantas had recovered ground in 2009-10 and 2010-11 before the existential threat of the industrial disputes of 2011 resulted in the controversial grounding of the fleet that year.

Then, of course, the group became engaged in the brutal capacity war with Virgin Australia that drove both airlines to the brink – Qantas lost $2.8 billion in 2013-14 and Virgin had to be bailed out by its shareholders. But in hindsight, that war created the opportunity for Joyce to completely remake Qantas.

Back from the brink

It is the post-2014 Qantas, free of much of the legacy baggage it had accumulated over generations of management, that really reflects Joyce’s impact. Since that point, Qantas has generated total investor returns well within the top quartile of ASX 100 companies, returning about $3 billion to shareholders through dividends and share buybacks.

The second phase of his tenure has, therefore, produced vastly better outcomes than the first. Qantas is now a high-performing company.

There’s another reason why a long tenure for Joyce, who is only 52, fits with Qantas’ needs.

Airlines operate within settings that require long-term planning and strategies, if only because of the lengthy lead times for new aircraft orders and the layers of complexity encountered in planning and negotiating new routes and slots and on-ground infrastructure at airports.

CEOs with lengthy terms can not only plan and execute for the longer term, but be accountable for their strategies and their implementation.

There is research — and the exemplar — to support the case for extended tenures for high-performing CEOs.

Management consultants Booz Allen Hamilton used to conduct research on the relationship between CEO tenure and performance. It found that the longer a chief executive’s tenure, the better the company’s performance and the bigger the CEO’s outperformance against their peers.

There was an interesting sub-conclusion. Regardless of the length of the tenure of successful CEOs, the second half of their terms produced materially lower returns than the first half. The low-hanging fruit in any corporate revival is available early in a term, with subsequent gains usually incremental rather than transforming.

Exception to the rule

There is a local exception to that finding. Former CSL chief Brian McNamee is rightly lauded for producing annualised total returns to shareholders of 25.2 per cent – over his 23 years as the biotech company’s CEO.

He was an exception to the Booz Allen rule. CSL’s total shareholder returns accelerated through that remarkably lengthy tenure. 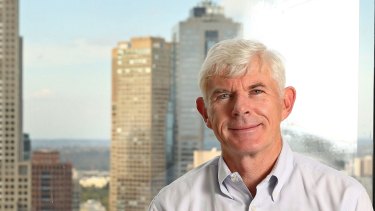 CSL’s Brian McNamee was an exception to the CEO rule.Credit:Scott Barbour, Nine.

The McNamee transformation of CSL from a small government-owned plasma plant in Broadmeadows into a global bio-pharmaceutical heavyweight owed much to a very clear and consistent vision and strategy and extremely disciplined execution.

Like McNamee, who was only 33 when appointed CSL’s CEO, Joyce was a young CEO at 42 and remains young enough to remain in place for a lot more than three years if he and his team continue to generate top-quartile performance. His age, like McNamee’s, doesn’t produce an imminent use-by-date.

There may never be another McNamee. CSL’s remarkable story flowed from a combination of a uniquely-suited CEO, his vision and a series of transforming opportunities that he seized on and executed brilliantly within a complex sector to create a business of global scale, which Warren Buffett would probably describe as having deep “moats’ and lots of incremental growth opportunities.

Aviation is a sector distorted by the level of state ownership and sub-economic ambitions, the role of governments in deciding who can fly where, and the peculiar tendency of airline CEOs to want to gold-plate their fleets and on-ground infrastructure rather than regard financial returns as the priority.

Volatile fuel prices add to the complexity of managing what are quite leveraged businesses.

That makes it even more important that its boards and management don’t run the companies for the short term; that they see through the regular short-term turbulence.

With only ten CEOs in its near hundred-year history, Qantas seems to have come to that conclusion a long time ago.

Stephen is one of Australia’s most respected business journalists. He was most recently co-founder and associate editor of the Business Spectator website and an associate editor and senior columnist at The Australian.

Michael Pascoe: What the betting says about Packer’s Crown – No worries, mate

NAB’s dividend cut could have been worse – The Age

Now for some food: Singo adds another pub to his central coast empire