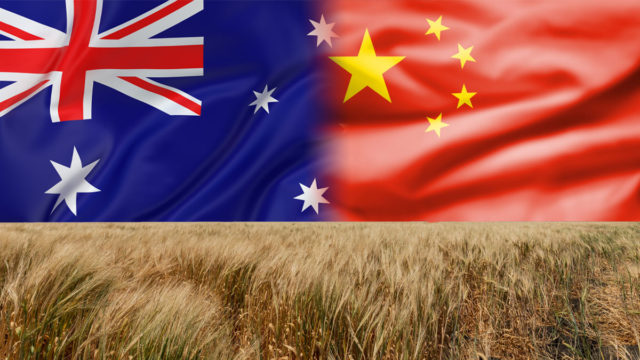 A new federal government report has flagged a ban on wheat exports as a distinct possibility in the escalating trade dispute with China.

The Australian Bureau of Agricultural and Resource Economics (ABARES) paper, released on Monday, said a “potential ban” imposed by Beijing was a significant hurdle the sector was expected to encounter next year.

Along with the La Niña event, which could increase wheat production nationwide but also damage crops in Queensland and New South Wales, roughly eight million tonnes of annual exports are estimated to be in strife.

Although China historically is not a key wheat export market, the report cited its demand for grain is currently at a 25-year peak.

And according to farmer lobby group GrainGrowers, China accounts for about 6 per cent, or roughly $300 million, of the sector’s total international exports.

A potential ban on Australian wheat would mirror disruptions placed on the barley industry, which has included exorbitant tariffs and suspensions handed down to grain handlers Emerald Grain and CBH.

The federal government is mulling whether to escalate complaints over China’s handling of Australian barley to the World Trade Organisation.

Despite the United Kingdom and United States markets figuring as likely alternative markets, there would be a dearth of demand for locally produced red, white and sparkling.

The new claims come as the federal Opposition and business leaders urge the government to find a congenial solution to the escalating diplomatic war after relations soured further last week.

Tensions peaked when Chinese foreign industry spokesman Zhao Lijian tweeted a doctored image of an Australian soldier taking a bloodied knife to the throat of an Afghan child.

The image, created by a Chinese political artist after the damning findings of the Brereton war crimes inquiry were released, drew an irate response from Prime Minister Scott Morrison.

“I think the strategy should be working out how we deal with the effects … of a China which demonstrably is taking a very different stance towards us and towards the region,” Senator Wong said on Sunday.

“[Labor] would work with exporters to diversify our markets to enable them to make sure we have more diversified opportunities, instead of what has happened, which is a greater reliance on China.”

The inflamed trade tensions even compelled West Australian Premier Mark McGowan to call for “cool heads” between both sides, with the state’s iron ore sector feared to be another casualty in the wings.

But with China’s reliance on Australian exports worth an estimated $85 billion annually, analysts say any tariffs would hamper its steel industry – which would flow on to infrastructure, urbanisation and military sectors.

“We’ve got to keep our principles – our sovereignty, our security and the realism, of course, the reality that we do need to continue to trade with China,” Ms Westacott told 2GB.

In an interview with The New Daily, Australian Grape and Wine chief executive Tony Battaglene said vintners needed stronger assurances from government that it would facilitate an industry-wide diversification strategy.

The post Wheat feared to be next on China’s export ban list, as business heads call for diversification appeared first on The New Daily.

A Sydney school has started a new farmers market. Not everyone is happy about...

Michael Pascoe: Our watchpuppies have been compromised all over again