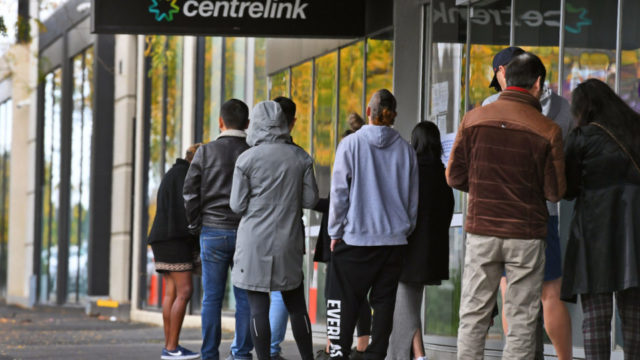 Some Australians face a prolonged period of unemployment as a result of the COVID-19 pandemic, a Reserve Bank of Australia analysis has warned.

It says while the economic outlook is highly uncertain, it is likely that the unemployment rate will remain elevated for a number of years.

“As such, some unemployed people are facing the prospect of a prolonged period of unemployment,” research in the central bank’s monthly bulletin says.

It says the average duration of unemployment has increased steadily over the 2010s.

Currently around one in every five unemployed people has been jobless for more than a year, an increase from about one in every eight a decade ago.

The share of very long-term unemployed people also increased over this period with around 10 per cent having been without a job for two or more years.

“The longer a person is unemployed, the harder it may be for them to find a job,” it says.

“This could be because they lose skills and networks, there is a stigma associated with being long-term unemployed, or because people become discouraged and leave the labour force.”

Long-term unemployed people are more likely to be older and male and have lower levels of formal education than those who have been unemployed for a shorter period.

The research shows the mean average of the long-term unemployed is 37 years of age, with 61 per cent male and with only 11 per cent having a university degree.

Labor jumped on the figures, saying it confirms the Morrison government’s hiring credit scheme will not help many of the people worst affected by long-term unemployment.

The scheme is an incentive for businesses to employ additional young job seekers aged 16-35 years.

“More Australians will be left out and left behind in the wake of this recession because of deliberate and damaging decisions like this,” opposition employment spokesman Brendan O’Connor and shadow treasurer Jim Chalmers said in a joint statement.

“In the deepest and most damaging recession in almost a century, the Australian people deserve a government that chases jobs, not headlines, and doesn’t leave workers over 35 behind.”

The Reserve Bank research says long periods of unemployment are associated with lower incomes and financial stress, which can also be debilitating for the individuals, families and communities that are affected.

“For the economy as a whole, long-term unemployment reduces the effective pool of workers and increases the cost of welfare support,” it says.

Uber rang in its IPO with champagne and mimosas. Then the hangover began

JobKeeper must be expanded to include new employees: Ombudsman

The Moneyist: My husband, 67, wants to leave his $2 million estate and home...