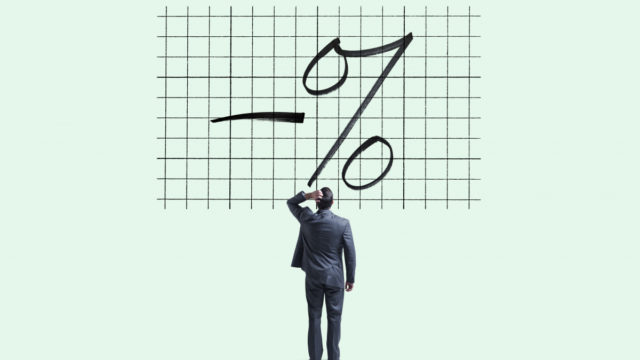 A week ahead of Thursday’s budget update, it finally happened.

Instead of the government paying to borrow in a way that would add to the burden on the budget (as has happened since time immemorial), it actually got paid to borrow.

Think about that. Investors with millions of dollars to lend went to the Australian Treasury and said not only will we not charge you interest, but furthermore we will pay you 0.01 per cent to make sure that you take it.

Not all of the borrowing the government did on that day was for negative interest rates; the rest was for slightly positive rates, but the dam has been broken.

The loan is short-term, being repaid in March 2021, and the payment to the government is still small relative to the scope of the budget. But future, bigger bond auctions might yield bigger payments at even lower (i.e. more negative) interest rates.

Who’d lend for less than nothing?

Australia is late to the party. Interest rates on government borrowings are below zero in Japan and much of Europe. Bloomberg News now says that a jaw-dropping $US18 trillion ($23.6 billion) of global debt is trading at negative rates.

Germany for example can borrow at minus 0.8 per cent. And although Treasury’s borrowing last week was only for three months, investors are willing to lend to Germany at negative interest rates for 30 years!

Read more: The government has just sold $15 billion of 31-year bonds. But what actually is a bond?

Who’d lend money for less than nothing? Many of us do it when we put money in deposit accounts.

Our banks might pretend they are giving us (a small amount of) interest, but in practice it’s often drowned out by the fees, meaning we end up paying them to take our money.

We do it because it is convenient, and a lot safer than storing the money under our floorboards.

The same sort of convenience is at play when a large financial firm finds itself stuck with half a billion dollars.

Storing it can be daunting. A billion dollars of physical cash weighs around 10 tonnes (even more, if it isn’t in $100-dollar bills), roughly equivalent to four Toyota HiLuxes.

Not only is cash a physical burden you also need to keep it secure, which adds to the cost of holding it.

Getting an institution to take their money, even paying it to take it, thus isn’t a bad alternative.

Read more: 5 ways the Reserve Bank is going to bat for Australia like never before

And if the Australian dollar goes up before the loan expires, they might get back more than they lent when measured in foreign currency terms, negative interest rates notwithstanding.

The Australian government wanted to borrow $1.5 billion on that Thursday. It was flooded with $8.2 billion of offers, most of them offering a slightly positive interest rate.

It’s how Australia compares that matters

That’s how keen investors are to park money with the Australian government. It’s why the dollar has been climbing as Australia increasingly looks to be a safer place to invest than countries still being ravaged by the coronavirus.

A lot depends on the alternatives. If rates dive further overseas, more deeply negative rates here will be enough to satisfy some lenders.

If good moderately-safe investment opportunities turn up outside of the government sector (if only), investors will look there instead.

Now that negative rates have arrived, there’s no telling where they’ll go.

Isaac Gross is Lecturer in Economics, Monash University. This article is republished from The Conversation under a Creative Commons license. Read the original article.

The post Negative rates explained: How money for (less than) nothing is helping out the budget appeared first on The New Daily.

Encore: Half of today’s households are at risk for retirement

The Moneyist: ‘Warren Buffett and Harry Potter couldn’t get those two retired early’: When...