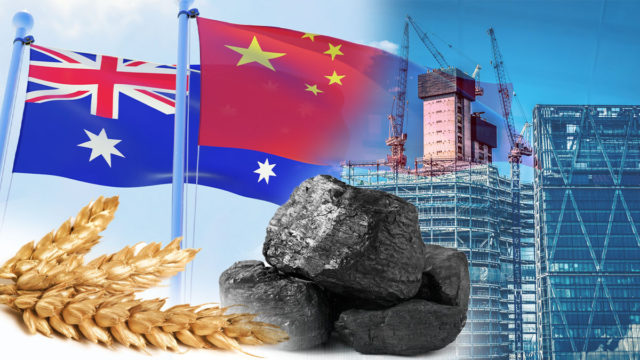 The Morrison government’s attitude to Chinese investment in Australia is confusing and will exacerbate the growing tensions over trade, China experts have warned.

The policy confusion was highlighted this week with the blocking of a $300 million takeover of Australian construction group Probuild by a Chinese consortium, with Treasurer Josh Frydenberg citing national interest grounds.

It follows a similar intervention by the Treasurer in August when he blocked a $600 million sale of Lion Dairy & Drinks to China’s Mengniu Dairy Co.

“Lion was owned by Japanese interests so we had Frydenberg blocking the sale of a Japanese-owned, Australian-based dairy and drinks manufacturer to a Chinese buyer, saying it wasn’t in the national interest,” said James Laurenceson, director of the Australia-China Relations Institute at UTS.

“It was already foreign-owned so there were clearly no national security issues.

“Now the purchase of a [ultimately South African-owned] construction company is being blocked citing national security concerns. It’s a bit of a stretch – it’s not like a telco, electricity network or a port.”

The blocking of the Probuild deal comes after months of ramped-up trade tensions which have seen China block Australian exports of wine, barley, lobster and timber.

Currently, 73 ships carrying about $1 billion in Australian coal are holed up in Chinese ports with officials preventing them from unloading.

“It is becoming a tit-for-tat outcome for both sides and the background is the decline in US dominance, with Australia trying to tread a path between the US and a growing China”

Professor Laurenceson agreed saying that Australia needed to distance itself from the US politically.

“China has made the assessment that Australia is using its alliance relationship with the US to attack China and we are the only country in the region being singled out,” he said. 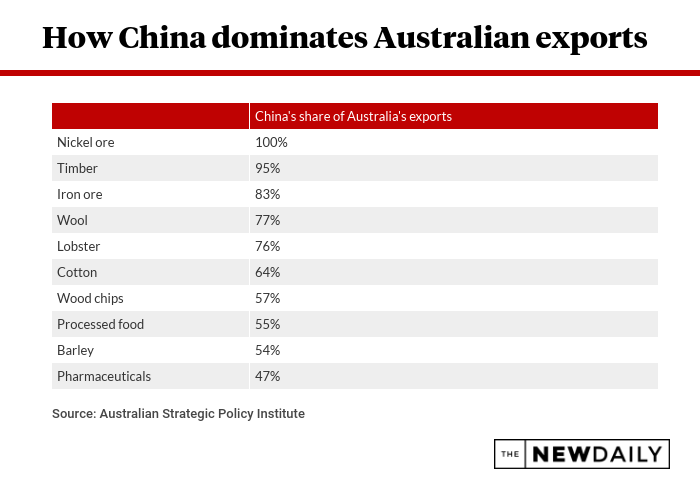 “But we are the only country in the region that has no dialogue with China at a leader or ministerial level because of the view it has formed about us.”

Australia has become highly vulnerable to China’s diplomatic mood, with the country now accounting for 40 per cent of our overall goods exports.

That was an untenable situation that the government should have addressed as China became more aggressive under Xi Jinping, according to shadow foreign affairs minister Penny Wong.

“This government has had over seven years to figure it out and it still hasn’t delivered a plan to support our exporters, save Australian jobs or diversify our economy,” Senator Wong said.

Not only is Australia tied to China through exports, the Asian giant provides a massive amount of the imports that the country relies on. 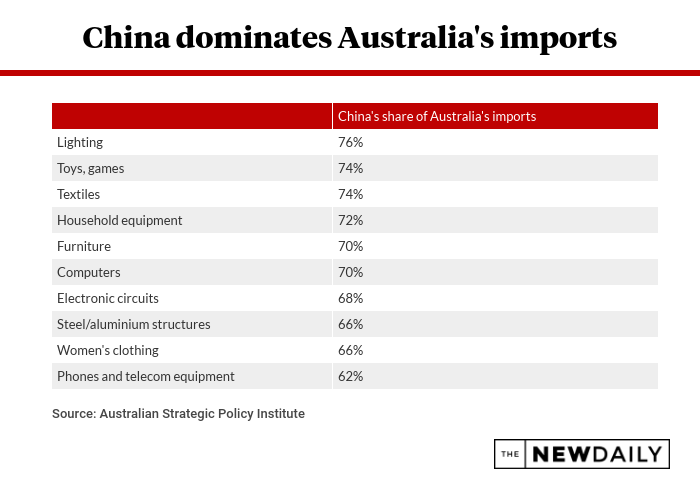 To date, the trade spat has had little impact on the overall Australian economy, with China buying only marginally less Australian products in 2020 than 2019, according to new official figures.

Australian goods accounted for 5.6 per cent of China’s total imports last year compared to 5.8 per cent in 2019, but have grown dramatically from the 4.9 per cent in 2018.

But for particular industry sectors hit by the bans, the situation will change this year.

“As this year unfolds you are going to see some fairly nasty shocks in areas like wine,” Professor Laurenceson said. 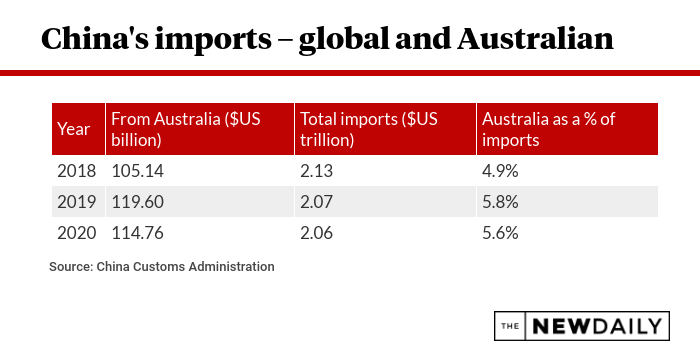 But China may be forced to lift some of the bans this year.

“With China’s economy weakened by the pandemic it has been able to block some Australian products,” Mr Treisman said.

“Demand has weakened and they have stockpiles of products like coal and timber.

“When demand picks up and the stockpiles run down they will want to start buying Australian products again.”

The bans have not been without consequence for China.

“Some reports show that prices Chinese electricity generators and steel producers are paying for coal are much higher than the international price at the moment,” Professor Laurenceson said.

Trade directions have also been changed by the bans.

“We are starting to see international markets being restructured in a way that does not harm Australia,” Professor Laurenceson said.

“China imports less coal from Australia and more from other countries, so that creates new opportunities for Australia to supply markets that once bought the coal now going to China.”

What is now necessary is clarity from the Australian government about its position.

“Australia needs to make public statements defining our relationship with the US and China,” Mr Treisman said.

The post Morrison government confusion over China will damage the economy, experts warn appeared first on The New Daily.

How to Buy Stocks – The Basic Necessities

Sticking to their principles, protesters glue themselves to London Stock Exchange

The pandemic will change K-12 education in many places forever — and that raises...