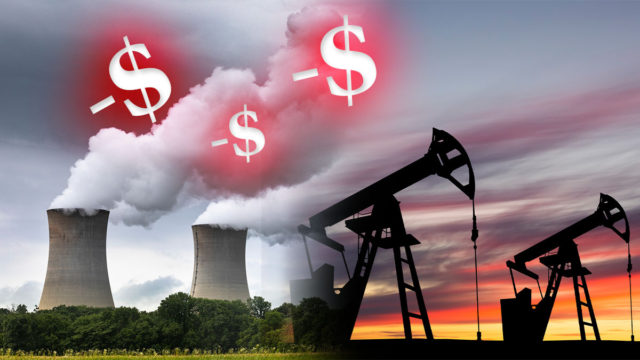 Generational change is driving the move away from fossil fuel investments, with both superannuation funds and finance houses responding with targeted investment policies.

“Over the last year we have seen an uptick in Hostplus members using our website to call for divestment from fossil fuels,” said Market Forces asset-management campaigner Will van de Pol.

“They are mainly younger members who join Hostplus because their first jobs are in cafes and bars, and that demographic has pushed hard for real climate action around the world.”

The campaign targeted Hostplus’s investments in coal-powered generation and coal mining through stakes in companies like AGL, Origin and BHP.

Hostplus for its part said it was reviewing its options.

“We are actively considering a net-zero emissions target as part of a review of the Fund’s approach to climate-related risk management,” the fund said in a statement.

“This review has been substantively under way for a number of months and we look forward to updating our members, and the broader community, on its outcome in the near future.”

Although Mr van de Pol said Hostplus was lagging behind other industry funds on climate change, he said it compared favourably to other superannuation funds.

“The industry funds overall are moving at a faster pace than the large retail [for-profit] funds,” he said.

“There is a generational aspect in that move, with younger millennials much more interested in ethical investment. You see it particularly with wealth transfer when a parent dies and their investments pass to their children.

“The younger generations are much more concerned about having their money in areas that align with their values.” 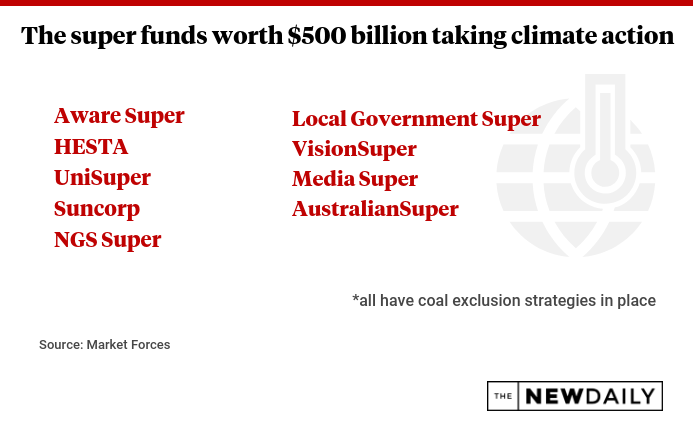 The super fund sector has already made significant moves to divest from fossil fuel.

Nine funds accounting for $500 billion under management, including eight industry funds and retail fund Suncorp, have already reduced fossil fuel holdings or pledged to no longer invest in them.

UniSuper was one of the nine funds and was the target of a Market Forces campaign last year.

“UniSuper has shifted some way – divesting from companies that get over 10 per cent of revenues from thermal coal and setting a target of net-zero emissions by 2050,” Mr van de Pol said.

However, while investors have taken some action on fossil fuels, their response falls well short of what activists like Market Forces want to see.

“Our position is they should have no exposure to thermal coal. [Instead], the funds have moved to set revenue thresholds of 10-15 per cent [from thermal coal]” Mr van de Pol said.

Despite some movement, Australian funds are still global laggards.

“Compared to big pension funds in Europe and the UK they are not moving at a fast rate,” Mr van de Pol said.

“The New York State pension fund recently announced plans to address oil and gas investments and expects to stop investing in that sector.” 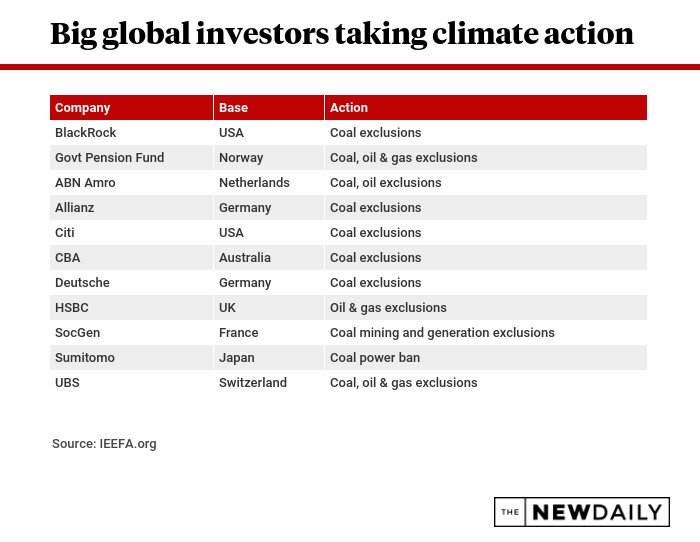 The election of US President Joe Biden is likely to add further pressure on funds and finance houses to divest.

“The Biden administration has been clear about its plans to act on climate change,” Mr van de Pol said.

“It will bring the US economy into line with a net-zero 2050 target. As allies, I hope to see that influence political decision making in Australia.”

Moves to divest fossil fuels by big funds, however, risked trampling on the rights of some investors, said Associate Professor Claire Matthews of Massey University in New Zealand.

She said investors ought to be given a say in how their funds operated – and not all of them were concerned about climate change.

“Even if you accept climate change, you may still feel that is fine to be investing in coal because it’s going to get a good return,” Professor  Matthews said.

“If an investment firm has a product it says is ethical, then I’ve got a choice going to that one or a different one.”

To allow that choice to be made, she said funds needed to clearly label their investment strategies.

The post Ethical investing on the rise as younger Australians reject fossil fuels appeared first on The New Daily.