Parents have to make tons of decisions that seem crucial to the long-term success of their young children. Should you breast-feed? What’s the best way to sleep train? Where should they go to day care? Author Emily Oster is out with a new book, “Cribsheet,” that shows parents there’s a better way to make decisions, and that there’s often not just one “right” answer.

Oster is a health economics professor at Brown University, and this is the second book in which she uses data to help parents make decisions.

When she was pregnant with her first child nine years ago, she was told things that pregnant women have been told for years: for example, don’t drink wine, don’t drink much coffee, don’t eat certain cheeses — or sushi. An economist, she decided to meld her two worlds and look into what these edicts were based on.

“I started doing all this research in the service of making decisions with my pregnancy, and I was frustrated by the fact that I had to do that on my own, and it occurred to me that the tools I was using to do this kind of research were the same tools I was using at my job, so it seemed like there was a fit there,” she told MarketWatch.

The result was a book called “Expecting Better,” for which she studied vast amounts of data to help women make more informed decisions. In many cases, she shows that conventional wisdom about pregnancy is wrong. That book came out in 2013, and a lot of expecting mothers are glad she wrote it. “When I talk with women about how they feel about that book, there’s a general feeling of retaking control. And this is a process where every time you turn around, you’re asked to make some other decision, and knowing what was coming and having some sense of what the evidence says is very helpful in feeling confident in navigating that experience. And of course, it’s also nice to have a cup of coffee and a glass of wine.” The book sold over 100,000 copies, she says.

Oster, who is 39 and has two children, ages four and eight, has now come out with “Cribsheet,” in which she looks into the many decisions parents have to make after they have a baby, including breast-feeding, sleep training, potty training, vaccinations and day care, among others. In this book, she uses data to help people make informed decisions, but also stresses that in most cases, parents need to make decisions that work for them. She adds that with this book she’s showing parents that there are many good choices you can make. While data can highlight costs and benefits, parents should think of their own preferences as well. 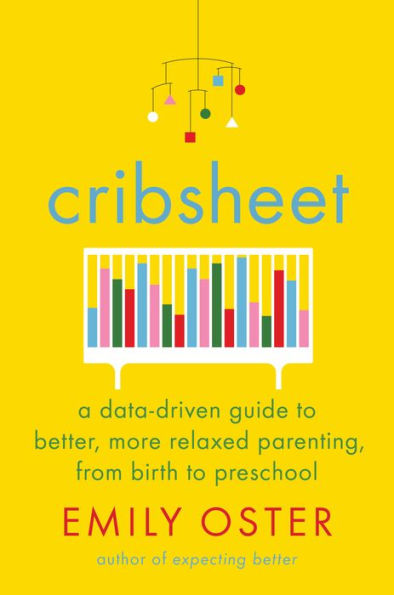 Cribsheet: A data-driven guide to better, more relaxed parenting, from birth to preschool

“My goal with this book is to make people happier with the choices they make,” she says. So often what makes parenting hard, she says, is that you make choices, you’re not necessarily super confident in what you’re choosing because you’re doing it for the first time, and there is a lot of outside pressure. “A lot of times, you make a choice and then the next day someone says, ‘I can’t believe you’re doing it like that.’ Then you question yourself. That kind of whiplashing back and forth means you never really feel confident in your choices. A lot of the work of the book is saying here’s how to think about your choices. Here’s what the evidence says, and here’s why you might choose this or that.’”

What does she recommend you say if someone gives you unwanted advice?

“I think people should rehearse a pat answer. ‘Thanks for your comments.’ If someone is really going to give you a hard time about the choices that you make — and they will, for sure — I’m not sure they deserve a detailed explanation of why you made those choices,” she says.

Oster recently spoke with MarketWatch about her books, parenting, and money.

MarketWatch: What surprised you the most when you became a parent?

Emily Oster: Everything about the first months of my kid’s life was surprising. [laughs] I had not thought about how out of control I would feel. I was used to having a lot of control and thinking about my choices and particularly with my first kid, I couldn’t believe how different this experience was from anything I had done before. You can’t imagine the highs or the lows. That you would love something so much, and that you would be so tired.

MarketWatch: Did you read a lot of books about parenting to prepare?

Oster: I think nothing can really prepare you. I probably didn’t read as many books as I should have. Also, I didn’t know what to read. And I think part of the niche this book fills is, hey, here are some of the things that are coming down the pipeline for you. I hadn’t gone through them and though, ‘here are some big decisions we’re going to have to make in the first few months,’ We just tried to make them as they were coming, which is a poor way to make decisions.

MarketWatch: I read that you have ideas on how to teach economics to high-schoolers differently. What are they?

Oster: Economics classes tend to be more macroeconomics, about things like what does the Fed do, what are interest rates and things like that. It’s good information for people to know, but I think they should also teach about the idea of opportunity cost and choices on the margin, which are really valuable concepts to understand. Not just if you want to be an economist, but to be a good decision maker in your life. And I also think those things can be resonant and approachable for people. And also, to use examples that are not “guns and butter.” That are more accessible to kids.

MarketWatch: Do you have money in a 529 plan to save for your kids’ education costs?

Oster: I don’t, but my in-laws have one. One of the main benefits universities offer is payment for some tuition for kids.

MarketWatch: What’s the best financial advice you’ve been given?

Oster: Buy index funds, and not to spend a lot of time overthinking the stock market.

MarketWatch: What do you not mind splurging on?

MarketWatch: What do you “hate” spending money on?

Oster: Probably car repairs. The worst thing I spent money on recently was when I broke both mirrors on the car — on the same day. That was a bad day. So self-imposed car repairs.

Oster: AirPods AAPL, +1.24%  . I just bought them, because I’m an elderly person and I just pulled the trigger on them yesterday and I love them and I feel stupid for not having gotten them before.

MarketWatch: Do you think you’ll ever retire?

Oster: Yeah, I think so. Academics often don’t, but my mother [who is also an economist] just did. She still keeps going to work each day, but she seems more relaxed.

MarketWatch: Have you made any money mistakes?

Oster: One time we bought a house and we should have thought more about the location before we bought it. We ended up moving too soon relative to the investment timeline. We didn’t really lose money on it, but we lost a lot of time.

MarketWatch: When did you know you’d write a second book?

Oster: The first book has done better each year, which is a somewhat unusual feature for a book. Initially there wasn’t a lot of pressure to do another book. But at some point my agent came to me and said, ‘Your kids are aging out of the next book. If you want to do it, this is the time to try to do it.’ She happened to catch me on a day it which I was feeling like that would be fun. And so I did it. And I’m glad that I did.

MarketWatch: Do you foresee writing a third book — about how to make decisions with teenagers and older kids?

Oster: I don’t think so. I think as my kids age into the next phase, we are in some ways reaching the limits of the data because people don’t study this as much but also because kids are so different and it’s hard to even imagine how data would speak to that.

Optimistic Wall Street may not be enough to lift the ASX

Mutual Funds Weekly: These money and investing tips can help your portfolio stand up...