Department of Education figures show NSW public schools made $31.87 million from hire of school facilities in 2017. Schools with successful markets such as Bondi Beach Public, Orange Grove Public in Lilyfield, Glebe Public and Rozelle Public are earning hundreds of thousands of dollars in extra income.

The Erskineville Farmers’ Market, which started in December last year, operates 9am to 2pm most Saturdays on the school grounds, with up to 35 stalls including food trucks and a coffee cart. The nearest cafe is less than 100 metres away.

Other farmers’ markets in the area – such as Carriageworks at Eveleigh, Orange Grove in Lilyfield and Addison Road in Marrickville – are located away from local shopping strips. Markets on shopping strips often focus on arts and crafts or secondhand goods.

Andrew Chesterton, one of the market organisers, said his business won a tender to operate the market but declined to reveal how much rent was paid to the school. In 2017, prior to starting the market, the school’s income from facilities hire was $32,342.

Mr Chesterton said he aimed to create a local market that offered a proper alternative to supermarkets. “There was a time when Erskineville and Newtown was filled with butchers and fruit shops and all that kind of thing, but that’s simply not the case any more,” he said.

Mr Chesterton and his partner were also locals and had “worked tirelessly to ensure the market is part of the community” including inviting the florist, fruit shop and deli to operate a stall free of charge. He had asked the florist not to return because “she had made it clear how much she hated it”, the fruit shop had pulled out and the deli was still participating.

Mr Youssif, the green grocer, said it was too difficult to run both the stall and the shop and it didn’t help that the stall was four metres wide and shared between the three vendors.

“Of course we don’t want to be there,” he said. “We were buying extra stock and then ending up with waste. It took time away from our business and looking after our customers. The transportation from the shop to the market and back again was hard. At the end of the day, there were not enough people.”

Mr Youssif did not understand why the council approved the market when the Eveleigh Farmers’ Market at Carriageworks was only three kilometres away. Council had also approved two Woolworths – a small one in Erskineville and a large one in Alexandria – less than two kilometres apart in the six and a half years since he opened. This had put “massive pressure” on his business and if the market also took customers away, he would be forced to close.

A City of Sydney spokesperson said council planning staff approved the school’s development application for the market in September 2017 “as it met zoning requirements and was considered acceptable”.

Ms Thomas said most Erskineville shopkeepers, including herself, were local residents who sponsored the school’s fundraising events and provided jobs for locals. She would support a different sort of market, such as arts and crafts.

She feared if the market succeeded and the operators brought in another flower seller, she would have to lay off staff. Another florist was at the market for Mother’s Day weekend, but Mr Chesterton said there were no plans for this to be regular. 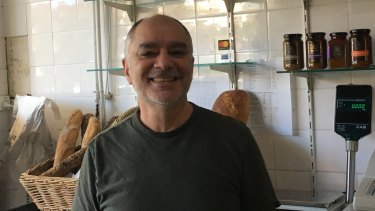 However, Nick Vanos, the owner of The Deli Erskineville, said he would continue to support the market and hoped it would succeed. He found he reached different customers at the market stall and also believed it added to the community.

“From all my travels around the world a local market within a village or within a city is one of the most essential and vital things the village or city could have,” Mr Vanos said.

A company called Green Beanz, which sells indoor plants, started out with a market stall and has now opened a shop on Erskineville Road.

The principal of Erskineville Public referred inquiries to the Department of Education.

“The market provider has advised the school they are trying to complement the nearby businesses,” a department spokesperson said. “Markets on school grounds on weekends is not new or uncommon.”

Caitlin Fitzsimmons is the associate editor of The Sun-Herald and a columnist.

Mayfield Childcare pays out dividend after raking in $12.4m from taxpayers

The Moneyist: My sister is a single mother and thinks ‘squatter rights’ is the...

Doughnut Economics: The hole truth about why we need to redistribute wealth and save...