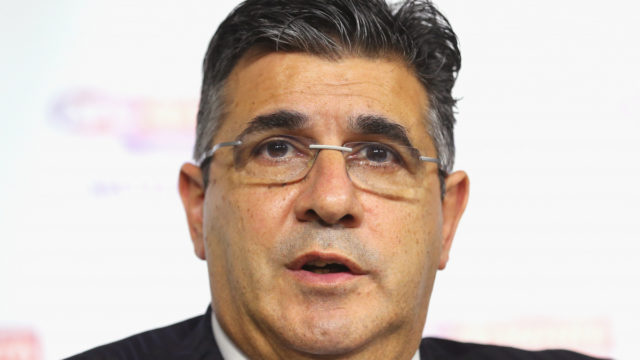 Crown Resorts director Andrew Demetriou has resigned from the board of the embattled gaming giant but has vowed to defend his reputation.

In a statement, Mr Demetriou said it was not an “easy decision” to step down and he had thought “carefully about taking this step”.

“I have always been a team player and supported the greater good. I will therefore step down from the Crown Resorts board to give Crown the best possible chance of becoming suitable to the NSW Regulator,” he said.

An extensive investigation commissioned by NSW’s Independent Liquor and Gaming Authority) this week concluded Crown was unsuitable to operate a licence for its new Sydney casino in its current form.

A report by Commissioner Patricia Bergin was scathing of the company’s culture and identified a litany of failures, including money laundering.

The ILGA’s chairman, Philip Crawford, said Mr Demetriou would need to resign if the company wanted to hold a licence for the Barangaroo casino in the future.

However, in his statement, Mr Demetriou said the comments directed toward him in the report were “unfair and unjust”.

“I will defend my reputation at every opportunity,” he said.

Two other directors, Michael Johnston and Guy Jalland resigned from Crown on Wednesday, and chief executive Ken Barton also appears likely to step down in the coming days.

Crown has also ended a “consultancy” with a third board representative, John Poynton.

Mr Demetriou said it had been an “honour” to serve on the Crown board and he had confidence a licence for the new casino would eventually be granted.

“Crown is a great company, with outstanding people who serve the company well. Barangaroo will be a magnificent addition to the Sydney landscape and I look forward to when it is fully operational,” he said.

Mr Demetriou’s photo and biography was swiftly deleted from the Crown Resorts website following his resignation.

Mr Demetriou was chairman of Crown Melbourne and a member of Crown’s Risk Management Committee from 2018.

The Bergin report found he had no formal anti-money laundering training before joining Crown’s board.

Following allegations of money laundering through two of Crown’s VIP banking accounts in 2019, Mr Demetriou said he never took the chance to look at the accounts himself, saying he was not an accountant.

During the inquiry in 2020, Mr Demetriou was taken to task for referring to notes when answering questions about corporate culture.

ILGA chairman Mr Crawford told the ABC on Wednesday the resignations were a “good start”.

“There need to be changes at the top and in senior management, a lot of board changes and that’s started already,” Mr Crawford said.

“We look forward to seeing a bit more of that and also senior management. That’s a start.”

The ILGA board will meet on Friday to discuss the commissioner’s report. Mr Crawford said the regulator would have “a fairly long list” of requirements for Crown to make itself suitable to run the Barangaroo casino.

The post Demetriou quits Crown, but goes out swinging appeared first on The New Daily.

The Moneyist: I lost my job at 55 and started my own successful business. I now constantly get texts from friends and former coworkers...

‘Not really money’: The RBA isn’t worried about crypto. Should they be?

Personal Finance Daily: What can I do now that I’ve had my COVID-19 vaccine...