Hughes started Stylkea from her garage in 2017 after she designed some mirrored stick-on panels for a piece of Ikea furniture and the hack went viral.

Stylkea turns over about $5000 a month selling panels, handles and other accessories for flat-pack furniture, with 23,000 followers on social media.

They have very deep pockets and very short arms.

“We are small fry, but the business is new,” Hughes says. “As a side hustle goes, it is a great side hustle and Stylkea is growing.”

Hughes says part of the time she spent starting the business involved researching a name.

“I come from a business background, so I am not naive when it comes to this sort of thing and I felt I had done good due diligence,” she says.

“I looked in the marketplace and wanted a name that described what the business does in a clever portmanteau. There were lots of businesses around using the -kea suffix to describe the fact they were part of the Ikea ecosystem.”

Other unrelated businesses that use the -kea suffix in a generic way to infer “market” or “store” include UK furniture retailer Oakea and US tobacco retailer Smokea. 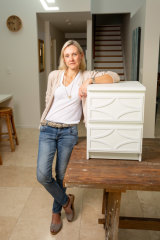 Kylie Hughes says she will not be intimidated by Ikea. Credit:Paul Harris

Hughes registered the business name Stylkea and website name, but the problem came when she applied for a trademark.

“That was when Ikea sent me their first cease-and-desist letter asking me to withdraw my trademark application,” she says.

“I said, ‘No, my research tells me this should be OK because there is precedent for this.’ My trademark was approved, but then it was advertised and other companies have a right to oppose it and Ikea did.”

Hughes says Ikea offered her $105 to cancel the business name and transfer the Stylkea domain to it.

“They have very deep pockets and very short arms,” she said. “I said to Ikea, ‘I want us to find a way to co-exist.’ I think it is a case of bullying. They put the heavy word on me before the trademark was approved because they just wanted to bully me out of it.”

Hughes is representing herself in the trademark battle before IP Australia, and claims Ikea has not registered the trademark “kea” and has no claim over it.

Ikea claims Stylkea is infringing its registered trademarks for Ikea and engaging in misleading and deceptive conduct.

“I won’t be intimidated,” Hughes says. “I trust in the process, I trust that IP Australia is fair and just.”

The matter is awaiting hearing, which could take between three and six months.

A spokesperson for Inter Ikea Systems B.V. says Ikea does not comment on ongoing cases.

“In general, as the worldwide franchisor and owner of the Ikea concept, it is very important for us to protect the intellectual property rights associated with the Ikea brand,” the spokesperson said. 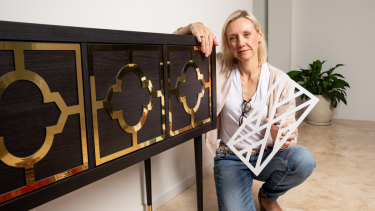 Kylie Hughes with one of the Ikea cabinets she has refurbished. Credit:Paul Harris

“We feel a great responsibility towards our customers and want to ensure that they can always trust the Ikea brand and know what is really connected to it – and what is not.”

Bill Ladas, partner at law firm King & Wood Mallesons, says the case emphasises the distinction between a business name registration, which doesn’t provide any rights, and a registered trademark, which provides exclusive rights.

“A later trademark need not be identical to an earlier trademark to be opposed or to infringe – if it is deceptively similar that is enough, and that will be down to a consideration of the significance of the aspects that the marks have in common and consumer perceptions of them,” he says.

“It shows the potential perils of relying on a business name as establishing some form of right when it doesn’t and building a business and openly adopting a brand that takes its inspiration from and incorporates part of a well-known brand.

“It also highlights the PR issues for well-known brand owners in taking steps to police their brand against businesses that clearly love that brand.”

State budget can restore business confidence after uncertainty prior to recent elections – Illawarra...

Personal Finance Daily: Why it matters when stimulus money hits your account, and under...